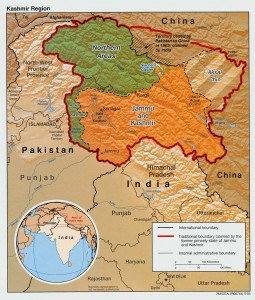 From Africa, to America, to Europe, to the Far East, to the Middle East, we see the threat of Islam getting worse, and Muslims causing major problems for non-Muslims. This is a worldwide war, and non-Muslims need to stop bickering and unite against this common enemy, before it is too late.

Twenty people were hurt Monday in Indian Kashmir as police fired shots in the air and used tear-gas to disperse hundreds of Muslims enraged over the death of a boy, police said.

Protesters chanting “we want freedom” and “blood for blood” blocked key roads in the Kashmiri summer capital of Srinagar after the 14-year-old was killed by a tear-gas shell fired by police on Sunday.

In Monday’s clashes across the city at least 13 protesters and seven policemen were hurt as officers fired shots in air and swung bamboo truncheons against protesters hurling stones and bricks.

Police said they had suspended an assistant police sub-inspector who fired the tear-gas shell.

Kashmir is in the grip of a 20-year insurgency against Indian rule that has left more than 47,000 people dead, according to official figures.

Anti-India feeling runs deep in the Muslim-majority Kashmir Valley, the centre of the unrest.

← French Catholic Church: Respect the Rights of Muslims
Iraq to sue US and UK →