After illegal immigrants from Africa rioted, old school Italians took to the streets to show them whose town it is. Expect clashes like this to happen across the West, as endless mass immigration is pushing legals to break point. We do not have to give up our countries to a bunch of unappreciative illegals. We owe them nothing. (Photo from EPA) 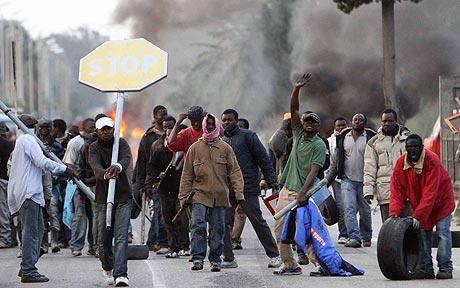 Clashes in the Calabrian town of Rosarno, which erupted on Thursday during a protest by mainly African farm labourers, had injured 18 policemen and 19 foreigners in two days, authorities in Reggio Calabria province said.

Around 100 locals armed with batons and metal bars, and some carrying clubs and cans of petrol, had meanwhile set up a barricade late Friday near a place where many immigrants meet, the Italian news agency ANSA reported.

Others had earlier occupied the town hall to demand immigrants be removed, Italian media reported.

In separate incidents on Friday, two immigrants were beaten and seriously wounded with iron bars, media and officials said. One of the wounded was admitted to hospital for brain surgery.

Two other immigrants were shot in the legs with hunting shotguns and five more were deliberately run over by vehicles driven by locals, they said. They were lightly hurt.

Police arrested the occupants of one of the vehicles, ANSA said, quoting investigators.

The violence broke out Thursday when hundreds of immigrants, most of them Africans employed illegally as farm labourers, demonstrated after some of them had been shot at with an air rifle, ANSA said.

Demonstrators set fire to cars and smashed windscreens before police intervened, leading to a scuffle that left several of the demonstrators wounded, ANSA said.

The disturbances continued on Friday with about 2,000 immigrants holding a sit-in in the centre of Rosarno while Italian residents blocked roads and occupied the town hall.

19 comments for “Italy: 100 Italians Armed with Pipes go After Illegals!”