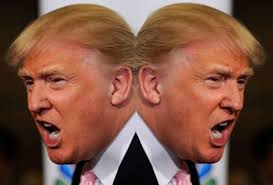 After not hosting a Ramadan dinner last year, President Trump has continued on with his 180 on Islam and has once again bowed down to the treacherous Muslim community.

Wishing Muslims around the world a “Ramadan Mubarak” — a blessed holiday — President Donald Trump on Wednesday hosted his first White House dinner for Islam’s holy month of Ramadan, an overture that surprised many in the Muslim community after he skipped hosting such a meal last year.

Speaking at an iftar dinner, which breaks the daylong fast, Trump offered a message of unity, recognizing members of the Muslim community at home and abroad.

That is nice Trump, but you do not dictate what Islam is. And it does not call for unity with non-Muslims. In fact the truth is quite the opposite.

O you who believe do not take Jews and Christians as patrons affiliating with them or showing them affection; they are patrons of each other being united in disbelief. Whoever amongst you affiliates with them he is one of them counted with them. God does not guide the folk who do wrong by affiliating with disbelievers.

“In gathering together this evening, we honor a sacred tradition of one of the world’s great religions,” he told an intimate audience that included Cabinet members and ambassadors from many Muslim-majority nations including Saudi Arabia, Kuwait, Jordan and the United Arab Emirates.

A so called religion that calls for dominance over the over-whelming majority of America. By force if need-be.

It was a dramatic departure from the inflammatory rhetoric Trump used during his campaign, when he called for a “complete and total shutdown” of Muslims entering the country, compared Syrian refugees fleeing civil war to a deadly snake and declared, “I think Islam hates us” in an interview with CNN.

Instead, Trump spoke of “the renewed bonds of friendship and cooperation” forged with “valued partners” from across the Middle East and said Iftars “mark the coming together of families and friends to celebrate a timeless message of peace, clarity and love. There is great love.”

You call this love?

Koran 9:30
SAHIH INTERNATIONAL
The Jews say, “Ezra is the son of Allah “; and the Christians say, “The Messiah is the son of Allah .” That is their statement from their mouths; they imitate the saying of those who disbelieved [before them]. May Allah destroy them; how are they deluded?

He recalled his visit last year to Saudi Arabia — his first foreign trip — as “one of the great two days of my life.”

That is the day the Saudis conned President Trump.