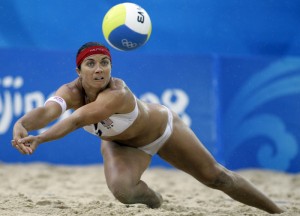 Recently it was reported that the International Olympic Comminty (IOC) had implemented a new rule that would allow women beach volleyball players to wear shorts and sleeves, instead of the usual bikinis. Of course this was done to appease the Muslim community. Now personally I do not think the West should be catering to Islam at all, as one demand leads to another.  But most of us here know there are many non-Muslims who pathetically bow to Islam. Thankfully the US women’s beach Volleyball team with not! I applaud these strong ladies. Sorry Allah!

LONDON — They’re going to be the cheekiest gals in London this summer.

Olympian Misty May-Treanor and her fellow competitors on the US women’s beach volleyball team vowed yesterday to keep wearing their sexy bikinis at the upcoming Games — despite a new rule that lets female players compete in dowdy shorts and T-shirts.
“We’re not uncomfortable in our bikinis,” said team member Jen Kessy.
“Growing up in southern California, that’s what you wear from when you’re a little kid to now in the summertime.”
Treanor said she loves to compete in her skimpy, bottom-baring bikini because “what you see is what you get — there’s no airbrushing.”

US team members, though, said there is nothing that would make them spike their tight bikinis.

“This is the most comfortable thing for us to wear,” Kessy said. “We can style our bikinis however we want. They can be bigger or smaller.
“If it is cold, we will put clothes on. But we won’t be playing in shorts. For us, that’s not comfortable. You get sand everywhere in the pockets. But for others, it’s now their choice.’’

108 comments for “US Women’s Beach Volleyball Olympic Team: We WILL Stick With our Bikinis!”