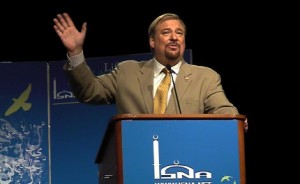 Recently I have been spending some time on Twitter engaging Muslims, and the non-Muslims who support Islam. Here is short conversation with Pastor Rick Warren. For those who do not know, Warren is a mega-Pastor who speaks at Islamic conferences. One of which was the 47Th annual Islamic Society of North America Convention (ISNA).

LogansWarning Christopher Logan
@
@RickWarren……Islam calls for the dominance over Christians, and yet you do not condemn Islam. You have failed Christianity.5 Aug

In response Warren had sent me this message.

RickWarren
It is a 100% false rumor Christopher.See http://bit.ly/pQAVhh But you gave me the opportunity to pray God blesses u greatly
5 Aug

If you go to that link you can see Warren tried to play words games. I never said a word about Chrislam, I said Islam.

My reply to Rick was the following:

LogansWarning Christopher Logan
@
@RickWarren Please don’t play word games with me. I did NOT say you support Chrislam. I said you do not condemn Islam.
5 Aug

At that point the mega-Pastor ran away…..

The next day I decided to send him one more Tweet.

LogansWarning Christopher Logan
@
@RickWarren Good work on ducking my return reply to you. Mohammad was rapist. Why do you not condemn him?
6 Aug

The Pastor has decided to take the easy way out and ignore me. Like I said, he has failed Christianity.

← UK Muslims: Sharia Will be Implemented by any Means Necessary!
“Taliban” Gangsta Rapper Vinnie Paz Runs From a Debate on Islam…. →

136 comments for “My Conversation with Islamophile Pastor Rick Warren”