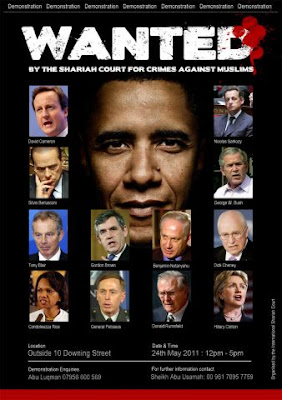 In response to the War on Terror and America’s support of Israel (which is quickly going away), UK Muslims led by Anjem Choudary are calling for the head of Obama and many other political and military figures. Unfortunately the Obama administration is hellbent in its effort to usher Islam into America. I guess they missed that part.

In response to the bombing of Muslims, the support for the pirate state of Israel and the propping up of dictators over Muslim countries attacks on American soil occurred on the 11th September 2001 after which George Bush declared that the United States of America is at war with Islam and Muslims in a crusade.

Huh? When did Bush ever say that?

I just LOVE IT! Muz are such flakes that they’ll probably get some bonehead with nary a brain cell to try on some of these. I can’t think of a faster way to get islam stamped off the planet then to scare hell out of the elitist, liberal twits. Conservatives shrug it off and smile when they say “Let them try”….liberals are likely to snivel, twist their hankies in a knot…and start plotting assassination of their own….or send soldiers to war to “take care” of the problem.

muslims call for obama’s head! i say come and get it! you’ll make over half the country happy. as for the liberals/socialists/communists, they’ll blame george bush, or the tea party folks, or american imperialism for your presidential de-capitation. it won’t be your fault. but the next time they spew out that infamous line “islam is a religion of peace”, it may stick in their throats just a little!

You couldn’t have any better illustration of the problem than the two postings in this installment…..one showing that the Muslims want Obama’s head, and the other about his government kowtowing to them!
What irony!!!

They influence people by using the fear of death. Because Obama has no religious background, and because he fears death, he really is vulnerable to their threats.
So they are threatening more and more– pushing the envelope.
For too long, Americans have been terrible strategists.
Now, we must teach ourselves to think strategically– to take every advantage Islam has taken and turn it into a bitter weapon against them.
I do not believe that I am being a Pollyanna when I say that it can be done.

They want his head?

COME AND TAKE IT!

This is not a dare; it should not be confused with Molon Labe – it is a genuine offer to come and take it at their leisure.

Hell Obama is the best friend a Muslim or terrorist ever had.

The EDL are not lying down and letting these Muslim nutters get away with it.

Makes me sick that they can get away with anything they want by screaming Islamophobia. . .

Anjem Choudary wants to destroy the Muslim Barack Hussein Obama. What’s so unusual about that? Muslims have always killed each from the very beginning. Just witness what’s taking place at present in Yemen, Egypt, Jordan, Iraq, Pakistan, Afghanistan, and several other Muslim countries. Hell, killing human beings has always been a way of life for Muslims. Choudary, probably you would find many American to help you realize your dream. They, too, don’t like the liar, and evil Obama.

Dave Lawson, when the evil Muslims scream Islamophobia, it’s because they can’t defend the criminal activity within their ranks. Just keep telling the truth of the brutally repressive, woman-demeaning, criminal activity of Islam, i.e., stoning women to death; the legal rape of underage little girls by sinful, depraved Muslim male sex perverts after a forced marriage; lashing underage little girls for trying to escape old depraved Muslim male sex perverts, who want to legally rape the helpless little girls; Muslim sadists chopping off clitorises of little girls; Muslim sadists chopping off hands, feet, and gouging out eyes of petty thieves, male and female; honor killings even for flimsy excuses such as a daughter failing to wear flappy Muslim rags, or “becoming to Westernized;” lashing old women caught talking to male Muslims not related to them; and many more Muslim crimes.

It is not a laughing matter that these banshees from hell issue fatwas for the death of any person. We should take note, these fatwas seem to be tolerated in Great Britain, and the West in general. Why? Why do we tolerate these murderous pronouncements? This is what we need to illegalize. This is the true hate speech, with intent to do bodily harm, (an understatement.) Why are the Dutch punishing Geert Wilders for telling the truth about Islam? Why are we not passing legislation to imprison anyone in the United States issuing fatwas that call for one’s murder? Choudry should be arrested. These imams stir bloody murder in their mosques, and don’t think they’ll stop without serious resistance.

[…] Ironically, Obama’s Justice Department seems to have no problem with Shari’ah Law taking hold in […]