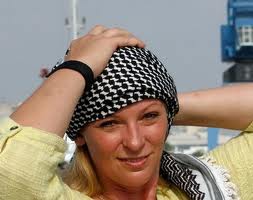 Booth who recently had some kind of Islamic “awakening”, had converted after protesting against Israel with a million hatemongers in Iran.

Anyway, yesterday, I stood in the midst of more than one million Iranian Muslims all chanting in unison ‘Marg Bar Isre-hell!’ and ‘Marg Bar Am-ri-ca!’ You know what that means Tony I’m sure; ‘Down with Israel, down with America’. The men, women and children around me withstood a day of no water and no food (it’s called Ramadan, Tony, it’s a fast). Coping with hunger and thirst in the hundred degrees heat, as if it were nothing. They can withstand deprivation in the Muslim world. Here in Iran they feel proud to suffer in order to express solidarity with the people of Palestine.

Sadly it is obvious that Booth does not mind that Islam is slowly devouring the UK.

Today when the streets of London reverberate with cries of ‘Allahuakbar!’ and ‘Down Down Israel.’Christians and Jews will join the thunderous cries of ‘Down Down Israel, marching shoulder to shoulder with the ‘political’ Muslims you say you fear so much.

But don’t worry guys, she knows what she is doing. She has admitted that she is all the way up to page 60 of the Koran (Which is approximately 1/8 of the book).

Lauren, here is some friendly advice. You should do some research before making major decisions in life. In the meantime you have turned your back on your own country. How sad.