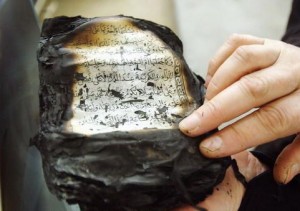 Once I read that the proposed Ground Zero Mosque would not be moved, I had a feeling the Pastor would not sit silently. He is not afraid of Muslims or our government. I have to give him a hand for his courage.

GAINESVILLE, Fla. – An anti-Islamic preacher backed off and then threatened to reconsider burning the Quran on the anniversary of the 9/11 attacks, angrily accusing a Muslim leader of lying to him Thursday with a promise to move an Islamic center and mosque away from New York’s ground zero. The imam planning the center denied there was ever such a deal.

The Rev. Terry Jones generated an international firestorm with his plan to burn the Quran on Saturday, the ninth anniversary of the Sept. 11, 2001, terrorist attacks, and he has been under intense pressure to give it up. President Barack Obama urged him to listen to “those better angels” and give up his “stunt,” saying it would endanger U.S. troops and give Islamic terrorists a recruiting tool. Defense Secretary Robert Gates took the extraordinary step of calling Jones personally.

← Burn a Koran Day has Been Canceled in Exchange to Move Ground Zero Mosque? UPDATE~ Fla. imam: No deal to move NYC mosque
Facebook: 6000 Sign up for Wear a Hijab Day on 911, Defy “Burn a Quran Day” →