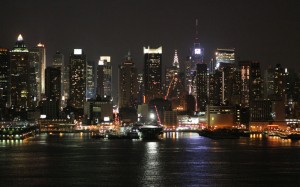 After several years in another state, I am finally back where I belong and that is NY. One of the main reasons that I moved back is that there is always some kind of political actively going on. I figured what better place to take on Islam, than NY? It took awhile to settle in, but it did not take too long to have an encounter with some Muslims in the city. About a week ago, I was in a friend’s establishment and it was closing time. I was talking to an employee of the place about the threat of Islam, and noticed two guys sitting about 6 feet away. I asked the employee who they were, and he said they are just some workers from a restaurant across the street. So I continued with the conversation.

A minute or so later the employee had to go do some work and walked away. As soon as he did, the two men sitting at the table approached me. The first said that they had overheard my conversation about Islam and wanted to know why I was talking about it? What is my concern? I responded by asking who they are, and where there were from. The leader of the two said we are from Egypt. At that point I was hoping they were Coptics and could be added to our team. He then said they are Muslims and they want to know why I am so concerned and speaking that way about Islam? I stated that Muslims are on a worldwide Sharia movement, which is a major threat to life as I know it and I will continue to speak out against Islam. It is a different way of life, than Western Civilization. He wanted to respond but could not think of anything to say to try and counter this fact.

At this point he looked even unhappier than when he originally approached me. First he tried to discredit me, and asked where I studied Islam. I said that I have approximately eight years of study on this issue, and have read the Koran translated by Islamic scholar Yusuf Ali, the Bukhari and Muslim ahadith, and the the Reliance of the Traveller, which is an Islamic Law manual approved by Al Azhar, the world’s highest Islamic learning school. The two of them just turned to each other, and didn’t know what to say. This really threw them off, because Al Azhar is in Egypt. Just me knowing about the school was obviously unexpected by them. He then tried to separate the hadiths from Islam, and stated something to the effect that some of them are unreliable. So I asked the other one if the Bukhari and Muslim ahadith are respected across the Islamic world? He said they sure were.

Since that did not work he tried to go into a Q & A with me on Islam. First he asked how many times a day do they pray? So I answered five, and jumped ahead of him and told him the five pillars of Islam. Taking the faith, prayers, zakat (charity), fasting, and hajj (Pilgrimage to Mecca.) He said alright…alright….Then I said there is something else called jizya (extortion), which I will never pay. The second Muslim who was silent up to now, said what is the difference you are paying taxes anyway? I told him no one is going to force me to pay a religious tax, in exchange for second class citizenship. He walked away, I told them they might as well quit now, as I probably know more about Islam than they do.

The Muslim that first approached me did not walk away though. He was not too happy, and once again asked what is my concern, and where was I from? That there is no way an American would be concerned with such things. I said he was partially correct, that most Americans do not pay attention to the threat of Islam. Then I quoted the leader of Hezbollah.

Hassan Nasrallah: “The American administration is behind Israel. I must clarify that when I say ‘America’ I do not mean the American people, most of whom are distant and ignorant of what is going on in the world,….

Me knowing this quote threw him off as well. They are obviously counting on the fact that many Americans are ignorant, when it comes to Islam. After that he went back into his you are not an American rant, you have to be from the Middle East. I repeatedly told him I was not. I then asked the mostly silent Muslim if he was pro-Sharia. He responded, of course he was. I thanked him for his honesty, and said we have nothing to talk about. So I turned and asked the talkative one the same question. He said no, but was still asking what my concern is. My concern is that Islam is a complete way of life, and its laws affects non-Muslims. It is a religion and political ideology combined. The quiet one said it is not, and I laughed as I asked what the Caliph was. He said he never heard of it. He went on to say Islam is not religion and politics combined, but he knew I was not buying it, and here comes the comedic line of the night…. As he was getting all worked up, he angrily stated “We are Muslims and we do not lie”. Not wanting this to get out of hand in my friend’s place, I let that one slide.

I asked the other one if you went back to Egypt, and the Muslim Brotherhood imposed Sharia what would you guys do? He said they would fight it in the streets. When I brought up the fact that his friend already admitted he was pro-Sharia, he changed his tune and said Sharia is better than US law. So I said that he should move to Saudi Arabia, but in the mean time put down that beer you are drinking. He looked at the beer and absolutely shut up. He was drinking that night, but when push comes to shove he was obviously going to stand with Islam over Western Civilization. I then told them I had to go, and he said we will finish this tomorrow night. I showed up, but they did not. A few days later I ran into them again. The leader of the two was very respectful (not that I trust him), and did not bring up the conversation at all. The other who is pro-Sharia could not even look me in the eye. The point of my story is that if we do not stand up to them, they will walk all over us. They must be told that we know they are liars, we oppose their plans, and we will fight tooth and nail against their religion.

For the record, you will see a lot of more of these types of encounters from me in the future. They need to know that we are awakening!

← Book Review: “Islam is of the Devil”
Dr. Terry Jones (Burn a Koran Day) To Appear on CNN Tonight! →

73 comments for “Back in the New York Grove: My First Encounter With Muslims in NY”