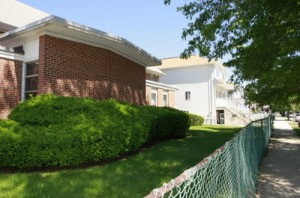 The Mosque movement across America continues. Recently Muslims are trying to put up two at Ground Zero, and just days ago they scored a victory in Wisconsin. When it comes to Islam, our freedoms hurt us, and Christians selling out to a religion that calls for the ultimate destruction of Christianity, is inexcusable in my book.

The organization that bought the property, is the Muslim American Society (MAS). A quick check on them shows us they are in bed, with the Cancer on American Islamic Relations (CAIR), and the following comes from their mission statement.

This movement brought the call of Islam to Muslims throughout the globe to reestablish Islam as a total way of life. The call and the spirit of the movement reached the shores of North America with arrival of Muslim students and immigrants in the late 1950s and early 1960s.

Did the sellout Rev. Keith Fennessy, do any research at all? Or is he just another “tolerant” leftist? Bad move Rev.

From the In My Backyard Desk…here’s an item that has ignited a small storm of controversy over in Staten Island:

The impending sale of an empty, 2 ½ -story convent in Midland Beach owned by St. Margaret Mary’s R.C. Church has neighbors angry and afraid because the purchaser is an Islamic organization they know little about.

Several hundred concerned residents turned out last night for an emergency meeting called by the Midland Beach Civic Association at the Olympia Activity Center, two blocks from the convent site at 555 Greeley Ave.

The association’s president, Yasmin Ammirato, told the gathering that she first learned about the convent sale on May 12. She added that the Rev. Keith Fennessy, pastor, told her at a meeting on May 15 with four representatives of the nonprofit Muslim American Society (MAS), the group set to buy the property, that he had “signed off, and money has been exchanged.”

She said that MAS agreed to pay $750,000 for the property, and its plan for the convent’s re-use includes a mosque and community center with after-school programs for children. “There’s a need for a mosque on the East Shore” from South Beach to Midland Beach, she said the representatives told her, citing Muslim Albanian and Turkish residents.

The convent occupies a 100-by-90-foot corner lot, with a current market value of $915,000, according to the city Department of Finance.

Residents in attendance last night were not happy about what they heard. One proposed a petition drive to remove Father Fennessy from his post, and the idea received sustained applause. Another suggested that the civic association consult with an attorney to explore legal options to fight the project. One woman raised a practical concern: “Parking here is already horrendous. How will another community center affect the neighborhood, whether it’s run by an Islamic group or not?”

“This hurts — it was done without even consulting us, on the sneak,” said Eugene Reems, 42, a life-long resident whose three children attend the parish elementary school, where his wife, Erin, teaches third grade.

“September 11 left scars on this neighborhood that will last for the rest of our lives,” he added, noting that part of the convent fronts Freeborn Street, which was renamed for FDNY Capt. Martin Egan, 36, who was killed in the terrorist attacks.

11 comments for “Staten Island: Church Sells out, Convent to Become a Mosque”