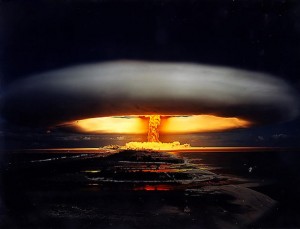 The nuclear ambitious Mullahs of Iran continue to thumb their noses at the West, and move forward towards creating a nuclear arsenal. The Mullahs of Iran may or may not be considered crazy, but they are deadly serious. Here is a clue, they slaughter their own people. Do you really believe that they want to be friends with us?

TEHRAN — President Mahmoud Ahmadinejad ordered Iran’s atomic chief on Sunday to enrich uranium to 20 percent, in a fresh challenge to world powers days after appearing to accept a Western proposal for the supply of nuclear fuel to a Tehran reactor.

Ahmadinejad blamed the world powers for the stalemate over a UN-drafted nuclear fuel deal, but left the door open for possible negotiation over the proposal.

“I had said let us give them (world powers) two to three months and if they don’t agree, we would start ourselves,” Ahmadinejad said in a speech at an exhibition on laser technology which was broadcast live on state television.

“Now Dr (Ali Akbar) Salehi, start to make the 20 percent with the centrifuges,” the hardliner told the atomic chief, who was sitting in the audience.

Ahmadinejad’s latest statement comes after he indicated in an interview on state television on Tuesday that Iran was ready to send its LEU abroad for converting into 20 percent nuclear fuel.

Iran and world powers are locked in a stalemate over the UN-drafted deal, which envisages the Islamic republic’s 3.5 percent LEU being sent to Russia and France for enrichment to 20 percent and then returned as fuel for the Tehran reactor.

Iranian officials have opposed this proposal, saying they would prefer a simultaneous exchange on Iranian soil, a plan rejected by world powers.

World powers are keen to ship out Iran’s LEU as they fear Tehran will enrich it to very high levels for use in an atomic weapons programme. Iran insists its nuclear enrichment drive is purely for peaceful purposes.

Ahmadinejad said Sunday that if the world powers “come forward and say ‘we will exchange (uranium) unconditionally and cooperate on your reactors and medicine’… fine then we will cooperate” too.

“Recently we said let’s swap (uranium) though we can produce the 20 percent, but they started playing games,” he said.

“They have just sent messages though that they want to fix things. The road to engagement is open. We did not block it.”

The near daily shifts in the Iranian position over the fuel deal has consistently raised skepticism among world powers, who want to halt Tehran’s galloping nuclear drive.

“I don’t have the sense we are close to an agreement,” US Defence Secretary Robert Gates said in Ankara on Saturday, a day after Iranian Foreign Minister Manouchehr Mottaki said the nuclear fuel deal was close to being finalised.

“If Iran has decided to accept the proposal of the P5-plus-one, they should do that to the IAEA (International Atomic Energy Agency),” he told reporters, referring to the five permanent UN Security Council members and Germany.

But IAEA director general Yukiya Amano, who met with Mottaki on the sidelines of the Munich Security Conference, said the Iranians brought nothing new to the talks.

“We had a very interesting discussion…. There was not a new proposal,” Amano told reporters.

Iran has “done nothing to reassure the international community,” Gates said, adding that “various nations need to think about whether it’s time for a different tack,” indicating the need for a fourth round of sanctions against the Islamic republic.

Russian Foreign Minister Sergei Lavrov, whose country along with fellow Security Council member China is seen as less keen on further sanctions, urged Iran to work through the UN watchdog.

“What we want from Iran is to verify very specific questions, raised time and again by the IAEA a long time ago, it is not a difficult thing to do,” he said in Munich.

This guy is a nut and his country is in a shambles. He will use whatever he can to remain in power. If he touches off any violence, Obama will over react and get us into another war to retain HIS power.

[…] hard to remove them. This article is perfect example of that, and so is the situation with the Mullahs of Iran. We need to fight Islam now, or else our families future generations will suffer later. The choice […]