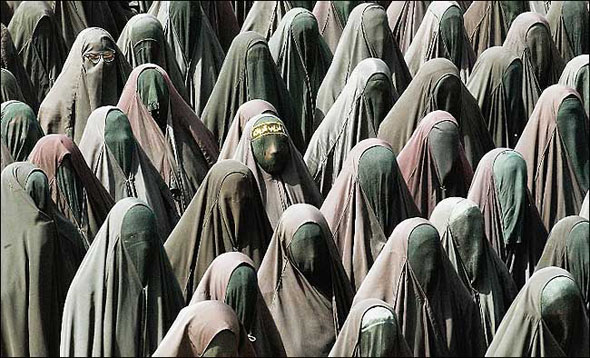 This is being done for security reasons, but of course the Council Cancer on American Islamic Relations (CAIR), does not care about that. They are threatening the school with a lawsuit. If someone needs to live under Islamic rules/culture, move to an Islamic country. The country will survive without you.

A Massachusetts college has banned students, faculty, and staff from wearing any kind of face covering, outraging some Muslim groups. The ban is believed to be the first of its kind at a U.S. college.

A spokesman for the Massachusetts College of Pharmacy and Health Sciences told the Boston Globe yesterday that the ban was intended to protect the public safety on its three campuses. The prohibition includes such items as ski masks and scarves, and is not specifically aimed at the traditional Islamic burka.

“It’s no surprise that college safety has become a huge issue of importance in the past couple years,” said college spokesman Michael Ratty. “This is another measure that public safety [officials] wanted to implement to keep the campus safer.”

The policy went into effect Jan. 1. Ratty did not cite any particular incident or rash of incidents that would have sparked the decision, nor have there been any news reports of trouble on any of the three campuses.

However, last year a 2008 graduate of the school, Tarek Mehenna, was arrested on terrorism charges. His father is a professor at the school. Ratty insisted there was no connection.

“Unequivocally it has nothing to do with that case,” he said.

At least one Muslim-American group is threatening to sue the school charging religious discrimination.

“It’s a very strange policy,” said Ibrahim Hooper,” a spokesman for the Council on American-Islamic Relations in Washington, D.C. “I don’t know where it came from. The only thing we can conclude is that it’s designed to specifically target Muslims.”

The organization would like to see an exemption for Muslim women who veil their faces for religious reasons.

The school has two Muslim women currently enrolled. Ratty told the Boston Herald that school officials had met with the two to discuss the policy, and that they were “on board with it.”

Hey Hooper, anyone can hide under a burka. Security first, religion second.