To be honest actions like this only hurt non-Muslims in this war. Now CAIR will complain more, and our authorities will be even more afraid to confront the Islamic community. We need to continue educating our fellow Americans to this threat, until we have the numbers to force our politicians to take a stand. Short term thinking like this vandalism is not the answer. 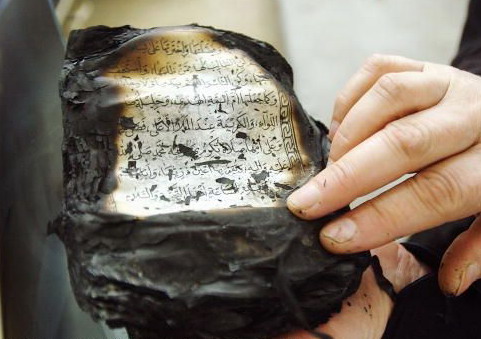 Costa Mesa police step up patrols after incidents at the center, including the burning of two copies of the Koran. The Muslim part of an interfaith display in Mission Viejo was defaced, a group says.

Costa Mesa police have stepped up patrols near the Islamic Educational Center of Orange County, the target of recent anti-Islamic acts including vandalism, hate mail and the burning of two copies of the Koran.

Vandals also recently defaced part of an outdoor interfaith holiday display in Mission Viejo, according to the Los Angeles office of the Council on American-Islamic Relations, which denounced both acts as “incidents of anti-Islam hate targeting the local Muslim community.”

The two incidents are thought to be unrelated but appear to be part of a recent uptick in anti-Muslim acts nationally, especially since the attempted terrorist bombing of a jetliner headed to Detroit on Christmas, council spokeswoman Munira Syeda said Saturday.

A burned and torn copy of the Koran was found in the parking lot at the educational center, on Airport Loop Drive, during Friday prayers. It was the second time in a month that a desecrated Koran had been found there, according to a statement on the Costa Mesa mosque’s website.

“This deplorable incident is a form of anti-Islamic assault, hate crime and terror campaign against American Muslims,” it read. “Even more, it is a great offense against 1.2 billion Muslim followers worldwide because it defiles their holiest and most sacred divine book.”

Costa Mesa Police Sgt. Ed Everett said that his department has increased patrols in the area but that no arrests have been made.

In the Mission Viejo incident, vandals defaced the Islamic portion of the holiday display but left nearby Christian components untouched. They painted over a verse from the Koran and left behind a piece of paper reading “No Islamic Lighthouses in the U.S.A.”

← US: Muslim With Rocket Launcher and Jihadist Writings Walks Free!
Mainstream Oklahoma Baptists: “We have extremists in both our faiths,” →