The hatred that stems from Islam continues to spread across Europe. Will European leaders wakeup before it is too late, and end all Muslim immigration? If not I do not see them winning this war. 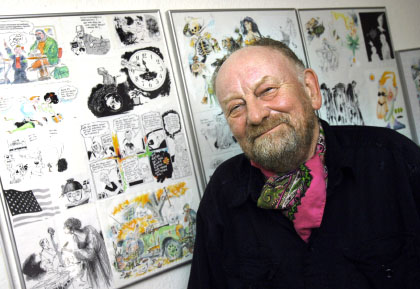 The Somali man who broke into Kurt Westergaard’s home wielding an ax was unable to get to the Danish cartoonist because he was hiding in a “panic room.”

Westergaard grabbed his granddaughter, 5, and retreated to a safe room upon realising his house had been broken into, CNN reported.

Danish police reportedly arrived at the cartoonist’s Aarhus home at 10 p.m. Friday after responding to the house’s alarm system.

The suspect, who had cracked the glass in the front door to get in, proceeded to attack police as they arrived on the scene. He was ultimately shot by police in the right leg and left hand.

Westergaard is normally accompanied by bodyguards when he leaves his residence, but no security was at his home on Friday during the attack, Denmark’s Security and Intelligence Service told CNN.

He has since been temporarily relocated, but police would not say where.

The suspect was charged with the attempted assassination of Westergaard and a police officer, the Intelligence and Security Service said.

The 28-year-old Somali man appeared in court Saturday on a stretcher. The judge would not allow his name to be disclosed, but authorities say he is a legal resident of Denmark and resides in Sjaelland, near Copenhagen.

The judge ordered that he be held for four weeks as the investigation is carried out.

According to Danish intelligence officials, the suspect was under surveillance for links to Al Quaeda’s east Africa ally al-Shabaab. But Chief Superintendent Ole Madsen says police had no idea that he planned to attack Westergaard.

Westergaard’s controversial caricatures of the Prophet Muhammad were published by Danish newspaper Morgenavisen Jyllands-Posten in September 2005, after which several newspapers reprinted the images in an effort to promote free speech.

His drawings depicted the Muslim prophet wearing a bomb as a turban, which he says was supposed to signify how some people use him to excuse terrorism. However, Muslims considered it a depiction of Muhammad as a terrorist himself.

Since the publication of the cartoons, several suspects have been arrested for allegedly plotting to kill Westergaard.

By far the most concise and up to date information I found on this topic. Sure glad that I navigated to your page by accident. I’ll be subscribing to your feed so that I can get the latest updates. Appreciate all the information here