The Swiss recently touched the tip of the iceberg by banning minarets, which will hopefully lead to further actions. Unfortunately another European country is allowing Islam to surge forward. Will Europe ever truly wake up and confront the threat of Islam? 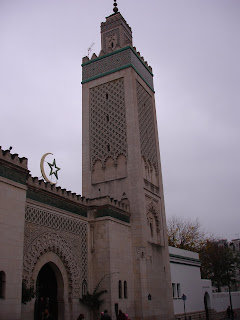 “Christians, Jews, Muslims, all believers regardless of their faith, must refrain from ostentation and provocation and … practice their religion in humble discretion,” wrote Sarkozy in an opinion piece in Le Monde daily.

The president was wading into an increasingly tense debate over national identity that has zeroed in on immigration fears in France, home to Europe’s largest Muslim minority.

Despite several local campaigns by the French far right, dozens of mosques are slated for construction in France, including a Grand Mosque in Marseille that will have a 25-metre (82-foot) minaret.

The government has said France will not ban minaret construction and noted that mayors have the final say on whether new mosques can be built with tall towers.

Sarkozy pledged to French Muslims to do “everything” to combat discrimination and ensure they can feel like full-fledged citizens of France.

But he cautioned that “anything that could appear as a challenge” to France’s Christian roots and republican values would lead to the “failure” in the drive to promote a form of moderate Islam in France.

France’s six million Muslims congregate in fewer than 2,500 prayer houses and mosques. There are currently 64 mosques with minarets of which seven have “tall minarets,” according to Interior Minister Brice Hortefeux.

A French parliamentary inquiry is currently holding hearings on whether to ban the full Islamic veil and the “burqa debate” has raised questions about how far France is willing to go to accommodate its Muslim minority.

For someone nicknamed the Shark, Sarkozy has little bite.