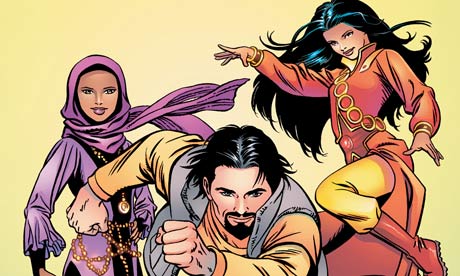 Most us see that Dictator Obama, is on a nonstop mission to cater to Muslims. Now his outreach program has reached comical proportions, literally. This comic book series raises a few questions.

1.Will the Islamic superhero, behead the enemy?
2.If it is a female, will wearing a burqa make her fly?
3.Is George Bush one of the villains?

Obama Pledges To Forge Better Ties With The Muslim World

President Obama today announced that Washington will set up exchange programs with business people throughout the Muslim world in order to establish better relations with the Muslim population across the globe.

The move is a part of the overall outreach programme outlined by the president last year. “The new beginning we seek is not only possible, it has already begun,” Obama told the Presidential Summit on Entrepreneurship in Washington, D.C, quoted The Associated Press.

During the summit, Obama announced that under the new exchange programmes Muslim busniess people will get opportunities to invest in Silicon Valley, technology, telecommunications, health care, education and infrastructure. The delegates from the U.S. and Muslim countries were present during the summit.

Last June, Obama had said during his speech in Cairo that the US would maintain better relations with the Muslims in future. “Over the past year the United States has been reaching out and listening,” he said. Obama’s bid to forge better ties with the Muslims include withdrawal of the US troops from iraq, working with Afghanistan and Pakistan to “isolate violent extremists,” and resolution of the lingering conflict between Israel and the Palestinians.

Obama said that the US is also making outreach in cultural sector, including a comic book series in which American superhero Superman and Batman work with their Muslim counterparts. “And I hear they’re making progress,” Obama said.

62 comments for “Obama: US Making Comic Books to Appease Muslims”