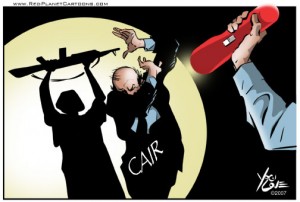 The war with Islam is not about religion to me, it is about the freedom of our families future generations. But the reality is, that without a large Christian movement, I do not see the West winning this war. This is very encouraging.

The organization, Reclaiming Oklahoma for Christ, is joining forces with Oklahomans Against CAIR Hate for the gathering it is calling “We Don’t CAIR.” Organizers said the event is designed to educate people about the Council on American-Islamic Relations.

Organizers for tonight’s event said it will focus attention on the council’s ties to radical Islam.

“Part of the reason we’re doing this is to share the other side of the story because what’s being presented (about CAIR) is not true,” the Rev. Paul Blair, founder of Reclaiming Oklahoma for Christ, said Monday.

“One of the purposes of CAIR is to spread propaganda about Islam here in America. CAIR conspired with other members of the Muslim Brotherhood to support terrorists,” said Blair, pastor of Edmond’s Fairview Baptist Church.

Monday, Saad Mohammad, a board member of the Oklahoma chapter of the Council on American-Islamic Relations, said his group does not support terrorists.

“I speak for CAIR and any other right-minded, level-headed Muslim: We don’t have any ties to radical Islam or terrorism. Those are things that CAIR opposes,” he said. “Our main concern is civil rights for all human beings.”

Mohammad said he and other leaders of his group would welcome an opportunity to meet with “We Don’t CAIR” organizers to talk about their concerns.

The Oklahoma chapter of the Council on American-Islamic Relations had its annual banquet Saturday at the Cowboy Hall & Western Heritage Museum.

Tonight’s gathering at Trinity Baptist, 600 N Cemetery Road, will include a presentation by Martin Mawyer, founder of Christian Action Network, who will speak about his organization’s work in exposing other aspects of what they perceive as a radical Islamic threat in the United States. Christian Action Network’s new film “Islam Rising: Geert Wilders’ Warning to America” will premiere at the gathering.

The film features the Dutch politician Geert Wilders who is currently on trial in the Netherlands for criticizing Islam.

(CAIR doesn’t) have any ties to radical Islam or terrorism.”

Saad Mohammad board member of the Council on American-Islamic Relations Part of the reason we’re doing this is to share the other side of the story because what’s being presented (about CAIR) is not true.”

← Yemen: Women Take a Stand for Child Marriages
Christian Science Monitor: Islam and Muslims Should not Scare you →