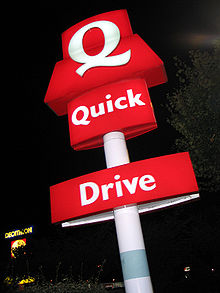 Muslim immigration slowly leads to Muslims taking over neighborhoods. Which leads to many businesses picking greed over protecting life as they know it. Catering to Islam will just lead to more demands, and the bottom line is that if Muslim immigration is not stopped, it will lead to the end of Western Civilization as we know it. Take a stand against Islam now, or your families future generations will suffer later. The choice is yours.

‘We are proud of eating pork, this is our land!’
10. Mar, 2010 by Shera Crossan in Editorials, Immigration, Religion

PARIS (Reuters) – A French fast food chain’s decision to serve only halal meat in eight restaurants with a strong Muslim clientele has sparked a wave of criticism from politicians decrying the step as unacceptable. A far-right leader said the 350-branch Quick chain was imposing “an Islamic tax” on its customers. A Socialist mayor has threatened a law suit for discrimination against customers who do not want to eat according to Muslim dietary laws.

We have here, in France and Belgium a fast food called “Quick”. It has recently been decided that some of these restaurants will no longer have pork meat in their burgers and will only offer Hallal meat to their customers.

“Les identitaires” which is a nationalist group fighting islamisation as well as many other things decided to first order a burger with bacon (girl at the very beginning) at a Quick restaurant in Lyon but were told off and expelled from that restaurant.

That’s why, they decided to go and protest within the restaurant itself against the islamisation of France and Europe. The guy talking in the mic says among other things that people who come and have lunch here support Islam and hallal meat which is obtained by slitting animals throat when fully alive etc…….then they all shout out “1st, 2nd and third generation we are proud of eating pork” and “this is our land”

The Tundra Tabloids reported a week ago on the French hamburger chain, Quick, that decided to strip pork products from its menu in order to serve the religious needs of the local population. They didn’t even bother to offer two kinds of sandwiches, one halal and the other with pork, so now t More..he people are (justifiably) up in arms and beginning to show their anger over being force fed with sharia nonsense in their secular state. KGS

A herd of 70 dissatisfied pigs invaded Quick Halal Villeurbanne on Sunday morning. They intended to protest against the decision to remove the bacon burger and cons of the new offer Quick who now proposes that the halal its customers.

It is unacceptable that a chain of “restaurants” which is largely Caisse des Depots et Consignations, in the French State, participates in the exclusion and segregation of the French in their own country. A state that contributes to development in our territory of Muslim ritual slaughter which, remember, forbidden to stun the animals during their slaughter resulting in an unacceptable and unnecessary suffering in animals.

Especially that To do this, Quick Payroll tax on Islamic certification of Halal products which are known to what used to finance Islamic proselytizing. And all this while that is no longer a pig in a growing number of school canteens and that prohibits the association of French Solidarity distributing pork soup to the needy.