While we have had some recent victories over Islam in Europe. French President Nicolas Sarkozy has gone from the shark to the chicken on us. He is now calling for the tolerance of Islam.

Nicolas, tolerating those who are out to destroy your country is flat out gutless. Did you forget this?

Sarkozy calls for tolerance with Muslims

In a speech at the national cemetery Notre Dame de Lorette in Pas-de-Calais, in northern France, Sarkozy also expressed his opposition to the the burqa, the piece of clothing that covers a woman from head to foot.

“We could not bear practices that insult the French converted to the Islam”, pointed out the President in the cemetery, where the graves of Muslim soldiers were outraged three times in 2007.

He stressed that the principle of laicism in France does not mean rejecting religious beliefs and practices, but the opposite, it means tolerance and respect in concordance with civic-mindedness and peace. Sarkozy paid tribute to French Muslims soldiers dead in military missions, among them Marshal Harouna Dio, who died in Afghanistan last January 13.

Maybe Sarkozy has been hanging out with Tony Blair too much. Blair on the Koran. 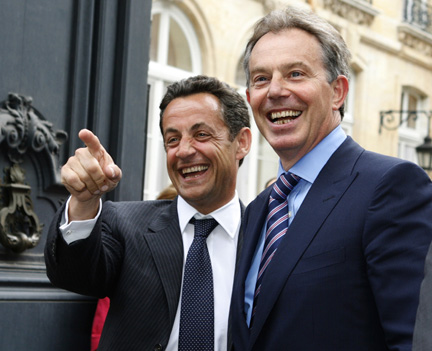