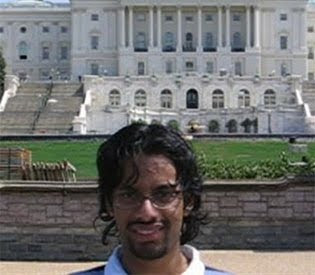 Pro-jihad Georgia Muslim Ehsanul Islam Sadequee states that he submits to no one but Allah. Well if Allah is so great, why are you going to rot in a US jail for your pro-Islamic actions? Think about that!

Roswell terrorist given 17 years in prison

By Bill Rankin
The Atlanta Journal-Constitution

A federal judge on Monday sentenced Ehsanul Islam Sadequee to 17 years in prison for terrorist offenses, saying the 23-year-old Roswell man viewed truth, justice and the American way as his “anti-Christ.”

“You used our country to advance your self interest and your distorted view of the world,” U.S. District Judge Bill Duffey sternly told Sadequee before imposing sentence. “If there is any contradiction to God’s will, I would say you are it.”

As he did at his trial in August, Sadequee represented himself at sentencing. He gave a lengthy statement in which he often quoted passages from the Quran in Arabic. Sadequee said his intent was to “bring the message of God and his greatness and his wisdom and his purpose.”

God, he said, is the true authority. “I submit to no one’s authority but the authority of God,” said Sadequee, who refused three requests from the judge to stand when he imposed sentence. Sadequee also said passages from the Quran called for him to surrender to God’s will and said that could mean jihad.

If what he had to say made it worse for him in regards to his ultimate sentence, Sadequee told Duffey, “it doesn’t matter to me.”

After Sadequee spoke for about 30 minutes, Duffey interrupted, asking him how much longer he anticipated speaking. Sadequee looked down at his written statement, which was more than 40 pages in length, and told Duffey, “It will take less than two hours.”

Duffey gave him 20 minutes to wrap it up.

In August, Sadequee was convicted of four counts, including conspiring to provide material support to Lashkar-e-Tayyiba, the Pakistani-based terrorist organization.

Duffey scolded Sadequee for never expressing remorse for any of his actions and strongly criticized him for exchanging communications with a 17-year-old in California and encouraging him to join his militant cause. His case, the judge said, provided “not just a glimpse into the dark side [but] a full portrait.”

Sadequee’s beliefs, the judge said, were “chillingly displayed” on videos Sadequee and his co-defendant Syed Haris Ahmed made of Washington-area landmarks. As the two men drove by the Pentagon, Sadequee turned the camera onto the military complex and could be heard saying reverently, “This is where our brothers attacked.”

Those comments, Duffey told Sadequee, were “without any regard to those innocent fathers and mothers and children who were on the plane that crashed into that building.”

Even though Duffey criticized Sadequee’s actions, he did not follow the prosecution’s recommendation of a 20-year prison term or impose anywhere near the maximum penalty of 60 years in prison. Ahmed is to be sentenced later today.

“This is not about your faith,” Duffey told Sadequee. “This is about the rule of law in our country, which you say does not apply to you and what you pronounced today will never apply to you.”

3 comments for “US: Georgia Muslim Gets 17 Years for Terrorism”