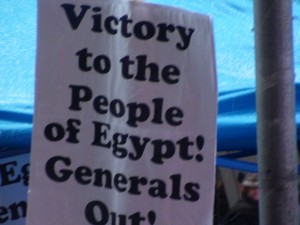 This afternoon on a cold, wet, winter day, Muslims took to the streets in support of the “the great Egyptian people”. In the recent election that took place in Egypt, “the great Egyptian people” voted in Islam parties to the tune of 2/3Rd’s of the seats in their government. With the pro-Sharia Muslim Brotherhood taking the lions share. This rally was lead by the same guy who took the stage at a recent UN rally for Palestinian statehood. He says they stand against dictators, but not a word about the Muslim Brotherhood. Muslims living in America would never be be pro-Sharia. Nah, that could never happen…

Of course no Muslim rally would be complete without what are most likely non-Muslims (dhimmis.)

The roll out of the Egyptian flag. My question is, if Egypt and the Muslim Brotherhood are so great. Why are these Muslims in America?

For the record, I did not see any concern for this:

(Taken at another rally) 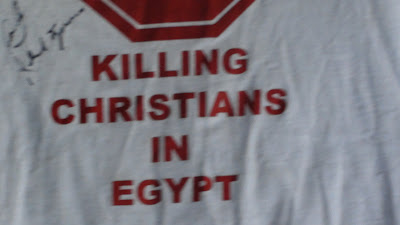 ← NY Islamic School: We are in an Un-Islamic Environment
Actor Liam Neeson: I may Become a Muslim →