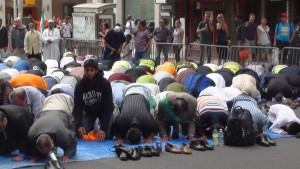 Recently I posted video footage of Muslims praying in the street at NYC’s 26Th Annual Muslim Day Parade. Of course that was not enough for NY’s Islamic community. They see America is in a state of weakness because of the politically correct disease, and will continue to push their religion in our faces. This upcoming event is another Islamic display of power, and let me make this clear. Muslims do not care what infidels want, they stand with Islam above all! It is time the rest of the country comes to terms with this, and demands an end to all Muslim immigration.

From the FRIDAY PRAYER AT WALL STREET Facebook page.

More Info
FOR THE SAKE OF HUMANITY-PLEASE READ!

THIS EVENT IS OPEN TO LITERALLY EVERYONE. MUSLIMS AND NON-MUSLIMS. THOSE WHO PRAY AND THOSE WHO DO NOT.

Join the peaceful protest! Spread the word to everyone you know!
BE PART OF THE SOLUTION! NOT PART OF THE PROBLEM!

Update as of 10/10/11:
*Insha’Allah (God willing) the Imam is Talib Abdurashid from Majlis Shurra *Location: Meeting at the park next to the stock exchange! Right where the Statue is!

A friend of Admin Justice:
“STOP censoring our media! We are slowly turning into China, with facebook links, photos, and youtube videos being deleted DAILY! I’ve even had some of my posts giving information the government doesn’t like deleted. WE HAVE THE FREEDOM OF SPEECH, PRESS, and to PROTEST! Our government is supposed to be for the people, by the people, and we have a right to protest when we disagree with what our government is doing! STOP TAKING AWAY OUR FREEDOMS! 700 people have already been arrested for protesting peacefully, and they are using force to stop it, just like at G20! Stop the fascism, we have a constituition of rights, stop taking them away!”

Our Forefathers would be very disappointed. Don’t you think? They spent COUNTLESS hours building America up and with a snap of your fingers is all fall apart. What a shame. Wake up America!

700+ peaceful protesters have been brutally arrested! They are NOT criminals.

*NOTE: The photo used is actually getting pulled off Facebook…so, the photographer added a lil text and renamed the file. Pass it on. I’m SURE the media doesn’t want this one out there. Share it as much as you can.

Once again we see Muslims using non-Muslims to help the cause of Islam. A cause they believe God has told them to live and die for. Unfortunately many non-Muslims blindly believe what Muslims tell them, but there are many crucial verses in the Koran that the Muslim puppet-masters do not tell their non-Muslim puppets. Here are two of them.

As I stated, Muslims are using non-Muslims and in the end will side with Islam over them. This second verse states the ultimate intolerant goal of Islam.

Don’t be fooled by smiling Muslims…

It’s 6 in the Morning

Brooklyn: Another Mosque Blasts Call to Prayer for all to Hear