In this installment of the ~Islam Invades Jamaica Queens!~, series, we will examine another piece of literature that I had obtained from Masjid Al-Mamoor. It was a flyer advertising the upcoming “Rally & March” which is taking place on April 9th at Union Square of NYC. 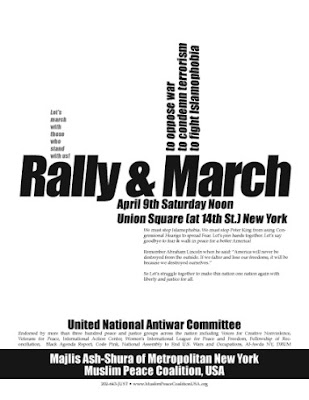 The rally is being lead by Muslim Peace Coalition USA. Some of the organizations that are endorsing it are: Voices for Creative Nonviolence, Veterans for Peace, Women’s International League for Peace and Freedom, Al-Awda, and CODEPINK.

The flyer boldly proclaims several statements, the first of which is “to oppose war”. I can understand people not agreeing with the wars in Afghanistan and Iraq, because nation building is not the answer now. But my question is, how can you oppose war and at the same time support Islam, which calls for perpetual war, and its “prophet”, Mohammad, the perpetual warmonger?

Muslim Hadith Book 004, Number 1062:
Abu Huraira reported that the Messenger of Allah (may peace be upon hlmg) said: I have been given superiority over the other prophets in six respects: I have been given words which are concise but comprehensive in meaning; I have been helped by terror (in the hearts of enemies): spoils have been made lawful to me: the earth has been made for me clean and a place of worship; I have been sent to all mankind and the line of prophets is closed with me.

The third statement is “to fight Islamophobia”. The truth is that the term “Islamophonia” is just a word that the opposition uses to try to get us to cease speaking truthfully about the perils of Islam.

On the bottom half of the flyer is printed the following:

We must stop Islamophobia. We must stop Peter King from using Congressional Hearings to spread fear. Let’s join hands together. Let’s say goodbye to fear & walk in peace for a better America!

Remember Abraham Lincoln when he said: “America will never be destroyed from the outside. If we falter and lose our freedoms, it will be because we destroyed ourselves.”

So let’s struuggle together to make this nation of ours one nation again, with liberty and justice for all.

Quite obviously, they are against us speaking out on the threat of Islam. I am pretty confident, however, that Abe Lincoln did not mean we should let our country be overturned by Islam, somehow perversely in the name of freedom!

When they say “one nation”, would they happen to mean one Islamic nation…?