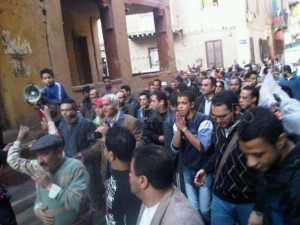 Chris, Egypt is over 90% muslim and yet they don’t want the M.B. or sharia? That’s a new wrinkle for me. If they are practicing muslims then why wouldn’t they? I thought sharia was the answer to all the world’s ills, according to them anyway.

In regards to the MB, I am just reporting on what happened in one part of Egypt. My source said that beyond getting Mubarak out of power there is no real plan. So in the end I believe Sharia will be installed.

If it is indeed the case that the majority of demonstrators are not calling for Sharia, this is very encouraging. However, given the absence of any strong political organisational alternative to the Mubarak regime, other than the long-established Muslim Brotherhood, you are right in thinking that alas Sharia will probably be introduced at some stage.

You may be interested to know that ‘Lord’ Ahmed (looking at the calibre of individuals in the House of Lords, you must be pleased that you don’t have such a body in the US!) has today stepped forward to defend Muslim paedophiles in the UK, and has turned the blame for their crimes upon English women: http://durotrigan.blogspot.com/2011/01/lord-ahmed-defends-muslim-predatory.html

The Munz
Reply to  Durotrigan

I would guess that the majority do not want it because under sharia they are treated like dogs. The only people who want it are the ones who do not have it and think it is a better solution. The ones who suffer it’s ravages everyday know better.

Author
admin
Reply to  The Munz

Unfortunately most of them do want Sharia.

According to the survey, majorities in Pakistan, Egypt, Jordan and Nigeria would favor changing current laws to allow stoning as a punishment for adultery, hand amputation for theft and death for those who convert from Islam to another religion. About 85% of Pakistani Muslims said they would support a law segregating men and women in the workplace.

I don’t believe it.

It’s the same thing we heard about the “Iranian People” recently. But when you dig deeper, and read more of the details — as Diana West on her blog reported — we saw that the Iranian demonstrations actually were pro-Islamic.

Just because a mass of Muslims wants a regime change, and just because the regime they want to change is a dictatorship, this does not automatically mean these Muslims have ceased being… followers of Islam.

To believe that millions of Muslims given a chance to recreate their polity will somehow be “liberal” and not Islamic is incredibly naive.

I never said it was millions, I only relayed what happened at one place. I also know the Iranian movement was not going to remove Islam from their govt either. I am not naive and have stated over and over, that “moderate” Muslims are not coming to the rescue.

The MB is just biding its time, they know where this is heading. Because they are behind the scenes directing it.

Any one else notice all the turkish flags? Revived Roman empire?
The Ottoman Empire has returned.

In Islam, there never is a plan.
They are not strategic thinkers.
They are only opportunists who harbor the long-term aspiration of conquest.

I agree. Also, the essence of pislam IS chaos, that is how it thrives and feeds!!

Nature abhors a vaccuum. In the Muslim world, there is no concept of democracy and popular vote. The Islamists — Muslim Brotherhood — will quickly fill the vaccuum left by Mubarak. To have a democracy, one has to accept the notion that election of government officers is self-correcting provided the process is continuous. Usually in the Middle East democracy ends up being each person, one vote, one time.

Beware of the snake Tariq Ramadamadingdong, the grandson of Hassan al Banna. He seems to be everywhere, enabling this disaster!
I wonder if his name is on the list of recent White House visitors.
Here is a video of him lying about the philistines, talking about the destruction of Israel:
http://www.youtube.com/watch?v=YbUpLhnr_Yk&feature=related

Do the ‘liberals’ not calling for shariah back ElBadarei? He is the MB….

No. The majority of them have said that putting Elbaradei in office has not changed anything as far as they are concerned.

Woe, 1 million is over 1% of the total population of Egypt. Think of what that would equate to if the same took place here in USA. Over 3 million people in the streets of a few major cities would be big problems.

Mubarak is either senile, or just plain has a death wish.

If the MB takes over and instills sharia, say bye-bye to the pyramids as they are un-pislamic they will most likely be blown to smithereens. A world cultural heritage gone forever.

The very least they would do is chisel the face off of everything.

Either way they will destroy their tourist industry. I have been there twice and never again. I will planning a trip to Tunisia but am glad I didn’t get to pay anything!

I believe the old saying “too little, too late” applies to what Mubarak is trying to do…

It is obvious that Islamofascism meaning Islam is trying to overthrow Mubarak and create a more hardcore Islamic state. There is no significant secular movement in Egypt. In fact if any secular movement gets any transaction the Jihadists will kill them. This is like Lebanon, Iran, Gaza, and everywhere else that has an Islamic majority. The Jihadist simply kill all opposition and emerge victotrious. Americans are naive and do not realize that killers beat voters!!!

The Muslim Brotherhood is lurking and will collect the spoils of this turmoil. What they want , and most likely will get , is the so called democracy enforcement in Egypt. This will have the backing of the Western world and everything will appear to be normal and on track to reforms. Yes , but surprise , another Gaza , another Lebanon. They will have achieved power and if the Egyptians thought Mubarak was a dictator,now they will have a real one whom will not have any regrets what so ever to beat the hell out of any opposition that tries to protest. You will be seeing the New Islamic Republic of Egypt. 1978 Carter was in charge , and we are still feeling his democracy bid with Iran. Now we have Obama , which the first thing he did was give the Muslims all the backing needed. What are we going to face within a few months or at the most 2 years , WWIII ,and it will be nuclear.Part consequence of electing a community worker because he was cool.

From Barry Rubin:
” But in Egypt look at the numbers in the latest Pew poll.

In Egypt, 30 percent like Hizballah (66 percent don’t). 49 percent are favorable toward Hamas (48 percent are negative); and 20 percent smile (72 percent frown) at al-Qaida. Roughly speaking, one-fifth of Egyptians applaud the most extreme Islamist terrorist group, while around one-third back revolutionary Islamists abroad. This doesn’t tell us what proportion of Egyptians want an Islamist government at home, but it is an indicator.”

In Egypt, 82 percent want stoning for those who commit adultery; 77 percent would like to see whippings and hands cut off for robbery; and 84 percent favor the death penalty for any Muslim who changes his religion.

That clinches it for me.
Obviously, it’s an Islamist uprising.
And yes, they’ll get Sharia law in all its glory.

control of the Suez canal and eventually the flow of Oil to we, who are dependent on others for our Oil since the Morons in charge wont allow us to drill our own reserves , such a smart group these progressives are……..NOT!

I agree, the Suez canal is not being talked about enough. Iran wants to block shiping lanes. They have already threatened to bomg freighters in the canal.

Suez Is the key to all this.

P.S. progressives are the death rattle of western scociety.