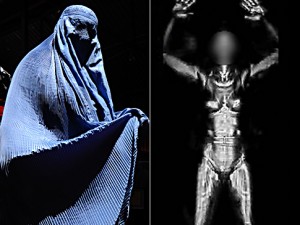 Well we are on a roll today my friends, earlier I posted about Abercrombie & Fitch showing some spine and fired a Muslim worker for wearing a hijab. Now we shift over to our friends in the UK who gave two Muslim passengers the boot from flying for not complying with the rules that everyone else has to. The message to Muslims that their religion will not come before our rules has to continue.

Two Muslim women have become the first passengers to refuse to subject themselves to controversial ‘naked’ full body airport scans, it emerged today.

The pair – who security officials insist were selected at random – opted to miss their flight to Pakistan and forfeit tickets worth £400 each rather than be screened.One of the women refused to go through the full-body scanner at Manchester Airport on religious grounds while her companion also declined for ‘medical reasons’.

The women were travelling together to Islamabad when they were selected to pass through the controversial security screen after checking-in at Terminal Two at the airport.

An estimated 15,000 people have already passed through the scanners, with the pair the first passengers to refuse a scan.

Both told airport staff they were not willing to be scanned. They were warned they would not be allowed to board the Pakistan International Airlines flight if they refused.

The pair decided they would rather forfeit their £400 tickets and left the airport with their luggage.

The £80,000 scanners were introduced at Heathrow and Manchester airports on February 5.

The X-ray machines allow security staff to see a ‘naked’ image of passengers to show up hidden weapons and explosives, but it has attracted criticism for also showing clear outlines of passengers’ genitals.

Manchester Airport confirmed the passengers had refused to be scanned but said it had received no complaint from the women.

However, civil liberties campaigners say the incident could form the basis of a legal test case to challenge the use of the Rapiscan device in airports.
Alex Deane, director of campaign group Big Brother Watch, said the organisation would represent the women if they wished to challenge the decision in court.

He said: ‘People shouldn’t have to sacrifice their health, their faith, their dignity, or their privacy in order to fly.

‘People with health and religious concerns shouldn’t be forced to go through these scanners if they have good reason not to. Foolishly, the government has ignored both issues and ignored privacy concerns to boot – they are in the wrong on this.’

Excuse me, but the reality is that the Islamic religion of war is the reason that these security measures have been added. So Muslims should be forced to go through them, if they want to fly.

38 comments for “UK: Muslim Women who Refused to Take ‘naked’ Full-Body Scan are Barred From Flight”