Just like in Europe, the left continues its love affair with Islam. This time the “progressive movement” Global Voices for Justice, and members of RevolutionMuslim.com, are planning to head to 500 Pearl Street to protest in front of Judge Berman. The movement is in support of Dr. Aafia Siddiqui, who is accused of opening fire on a US Soldier and being an Al Qaeda member. Here is a little back round on the doctor. 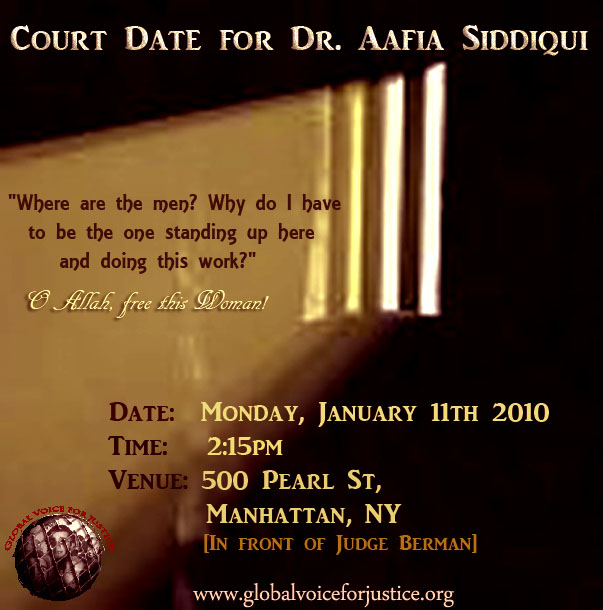 During a typically stormy hearing last Thursday, Siddiqui interrupted the judge, rebuked her own lawyers and made strident appeals to the packed courthouse. “I am boycotting this trial,” she declared. “I am innocent of all the charges and I can prove it, but I will not do it in this court.” Previously she had tried to fire her lawyers due to their Jewish background (she once wrote to the court that Jews are “cruel, ungrateful, back-stabbing” people) and demanded to speak with President Obama for the purpose of “making peace” with the Taliban. This time, though, she was ejected from the courtroom for obstruction. “Take me out. I’m not coming back,” she said defiantly.

What a sweetie, she sounds like someone the left would bring home to mama.