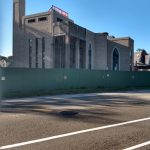 Once again working on a tip from a Long Island Logan’s Warning reader I am forced to report on another case of Islamic expansionism that is taking place in NY. Queens to be exact. What is eerily similar to the last tip the same person handed to me is that both are cases of Muslims muscling into residential neighborhoods with no concerns for the beliefs and wants of non-Muslims.﻿

END_OF_DOCUMENT_TOKEN_TO_BE_REPLACED

Earlier this month, I reported about the halal stands that have invaded NYC, and Brooklyn. Theses stands are now ubiquitous in the Boroughs of Manhattan & Brooklyn. Now, the landscape of Queens, NY is dotted by the halal invasion. Neon night (or light) style!

END_OF_DOCUMENT_TOKEN_TO_BE_REPLACED

Muslims say jump, and as usual non-Muslims ask how high? If this constant catering to Islam does not stop, eventually the non-Muslims of this country will end up being subservient to Islam. Which is just what Islam calls for.