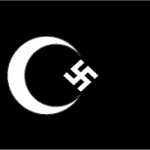 As ugly as it might sound the comparison is correct. Because Islam and Nazism do share a profound hatred of Jews.

END_OF_DOCUMENT_TOKEN_TO_BE_REPLACED

Longtime readers might remember my run-in with NYC’s Muslim, so called comedian Dean Obeidallah. I call him a so called comedian, because the reality is that he is a Muslim propagandist who uses the theatre of comedy to whitewash the threat of Islam. Purposely misleading naïve and trusting patrons.