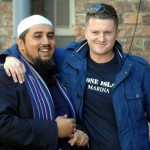 I think it is safe to say that you have heard about Tommy Robinson’s departure from the English Defence League (EDL). But I wanted to add my thoughts to the discussion. Now I understand that some bad elements, Nazis and white supremacists infiltrated the EDL. But he should have tried to weed them out. Maybe he did try, or maybe he did not try hard enough. Either way, he could have just stepped down from the EDL command. Instead, he steps down and then stabs thousands of good EDL members in the back, by joining the Quilliam Foundation. A Muslim lead “think tank”. There is where my problem with Tommy begins, and this is where my support for him ends.

For those who do not know Quilliam is a government funded so called “moderate” Muslim group, that Tommy naively believes is going to save the UK from Islam. Even if Quilliam was sincere, the odds of them saving the UK from Islam, are the same as Zuhdi Jasser saving America from Islamic rule. Slim and none. The “moderate” Muslims are going to save the day fantasy is something me and the dynamic duo, Pamela Geller and Robert Spencer, have criticized for years. It is not happening. That is why I was happy to see their statement today on Tommy and his new “friends”.

If you go to Jihad Watch and read the article you will see the name Mo Ansar (pictured above with Tommy), and how he tried to cover for Islam based child marriages. On Twitter I had a few “conversations” with him, and it is true. He will not condemn Islam for allowing child marriages.

Narrated Hisham’s  father: Khadija died three years before the Prophet departed to Medina.  He stayed there for two years or so and then he married ‘Aisha when she was a girl of six years of age, and he  consumed that marriage when she was nine years  old.

Instead he points to past history to try to justify it. Nice company you keep Tommy Robinson….

Now I just wanted to add one thing to what Pamela, and Mr. Spencer stated about Quilliam. Besides all of that, Quilliam has labeled the great Geert Wilders a “bigot”, and said the following:

“We therefore challenge Geert Wilders to an open debate in which we will argue that Islam is compatible with secular democracy and that, contrary to what he apparently believes, Muslims are not a threat to Europe and its values.”

I am a supporter of Mr. Wilders because he fully understands that in order to win this war, non-Islamic countries need to end all Muslim immigration.

But Quilliam wants us to believe that Muslim immigration is no threat to Europe.

← Is Madonna Heading Towards Islam?
Tommy Robinson’s Defection from the EDL has Lead to… →