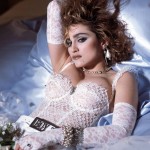 Unfortunately there are plenty of “celebrity” Muslims in America. There are two major problems with this. First, they have turned on America by joining the ideology of the enemy. Secondly, they have a lot of influence of others, and portray Islam as a “religion of peace”. But the truth is that “peace” Islam style, means suffering for non-Muslims. The latest possible celebrity ….err….convert to Islam is the “material girl” herself, Madonna!

Has Madonna ditched Kabbalah for Islam? Singer reveals she  is studying the Koran

It is almost a quarter of a century since she  first sang Like A Prayer.

But it seems the intervening years have done  little to help Madonna decide exactly who she’s praying to.’

For it appears the queen of re-invention may  be on the verge of one of her most startling changes yet, after she revealed she  was studying the Koran.

The 55-year-old was raised a Roman Catholic,  but for the past 17 years she has been a devout follower of Kabbalah, a mystical  offshoot of Judaism.

Now the singer, whose current partner is a  Muslim, has begun investigating Islam.

She said: ‘I am building schools for girls in  Islamic countries and studying the Koran.

Modonna who “follows” Kabbalah (Mysticism in Judaism), has taken on a Muslim “partner”. I wonder if he ever told her how Mohammad, who was Islam, really felt about Jews?

‘As my friend Yaman always tells me, a good Muslim is a good Jew, and a good Jew is a good Christian, and so forth. I couldn’t agree more.

Well then, she has not read the entire Koran yet….

Madonna: ‘To some people this is a very daring thought.’

No, that would be an uninformed thought.

Madonna has followed Kabbalah since 1996. She famously persuaded her former husband, British director Guy Ritchie, to attend Kabbalah services before they split in 2008. But she and her current partner Brahim Zaibat, 25, have reportedly argued about religion because of his Muslim faith.

I cannot image why….

17 comments for “Is Madonna Heading Towards Islam?”