One popular IslamoCON is when Muslims say they respect Jesus. They say this in an effort to get non-Muslims to believe Islam is Christian friendly. But the reality is that Muslims respect a different version of Jesus than Christians do. According to Islam, Jesus will come back as one of them and destroy Christianity. (Break the cross)

To add to that insanity, Mohammad was all for driving all of the Christians out of the Arabian Peninsula.

Because of this madman’s message, Christians have been persecuted across the Middle East for centuries. While many told themselves it could never happen in America, I knew it was just a matter of time until the persecution started here. A vile example of this can be seen in the Muslim dominated Dearborn Michigan.

Tonight while walking through the city, I saw a first hand account of a Muslim’s hatred for Christianity! The guy preaching is a regular in he area. 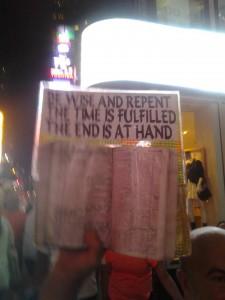 As he was holding his sign I saw a head-scarfed Muslim looking not too happy, making a bee line towards him. A bit hard to see as I had to snap the pictures fast, but she is on the left with two kids. 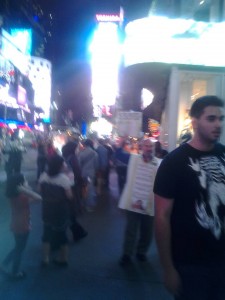 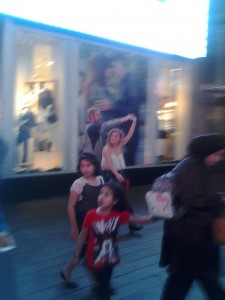 The reason the kids are still staring at “repent guy” is because she had actually stopped behind him, giving him hate-filled up and down looks. As if to say, you have a lot of nerve preaching anything but Islam on the streets! Now some might see this just as one individual Muslim, and to be no big threat. But mark my words, as Muslims in America grow in power their true attitude towards Christianity will become more prevalent.

Muslims did not take over the Middle East overnight (outside of Israel), so we need to think long term here. Please echo the North American Infidel (NAI) call for America to become energy independent and end all Muslim immigration. We are the last line of defense between Islam and our future generations.

42 comments for “NAI Exclusive: NYC Muslim NOT Happy With Christian Preaching for Jesus!”