The other day on Twitter I noticed that “my friend” and NFL star Husain Abdullah, was bragging about his son joining his backstabbing cult of hate.

WOW! My son just called me and said he gave his first Shahadah! The dude is only 5! #Takbeer

For those who do not know, Husain is part of the NFL’s Muslim Brotherhood.

Muslims in America are clearly changing the country to suit Islam, with no concern whatsoever or the wants and beliefs of non-Muslims. If it were up to them non-Muslims would just shut up, and go with the Sharia laced program. However I am not willing to do that. I fully believe that in a non-violent way, we should let them know we will not let walk all over us!

As predicted, Abdullah used his top notch speed to run from a debate…. 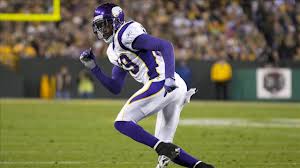 Now this is the part where the Islamic lies, and attempts of intimidation kick in.

Ali, a Proud slave to Allah….

@LogansWarning @imamshafiee I am proud to be a slave of God. Anyone who’s God’s slave is indeed His loyal servant.

He decided to join in by running to Husain’s brother Hamza.

@HamzaAbdullah21 Please see the first comment. Thought I would bring it to your attention. Sad to see this. pic.twitter.com/31Du1wyn25 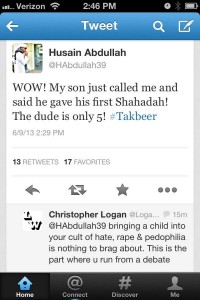 Apparently Ali is OK with the pedophilia and rape Islam legalizes. He will prove this over and over.

6 comments for “Muslim NFL Star Runs From Logan’s Warning, Then the Lies and Attempts of Intimidation Start!”