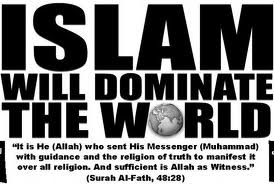 Unfortunately the United States Department of Jihad is threatening to play bully again, and attempt to ram Islamic Law down our throats. Back in 2010 the Department of Jihad, threatened Tennessee officials over mighty infidel opposition of Mosque construction.

Feds: opposing Tennessee mosque could be a crime
Richard A. Serrano, Reporting from Washington
October 18, 2010

Washington….The Obama administration, for the second time in two months, interjected itself Monday into an angry local dispute over a proposed Islamic center, warning local officials that opposing the mosque could violate the civil rights of its members and become a federal crime.

This time around Islam loving Obama wants to silence the critics of Islam and Muslims. Personally I would rather have a televised debate with him, or his henchman US Attorney General Eric Holder on the issue. But unfortunately that will not happen.

In its latest effort to protect followers of Islam in the U.S. the Obama Justice Department warns against using social media to spread information considered inflammatory against Muslims, threatening that it could constitute a violation of civil rights.

I have a question for the DOJ:

Explain how pointing out what the Koran and Sahih Ahadith state is inflammatory against Muslims?

The fact is that Koran and Sahih Ahadith are inflammatory against non-Muslims.

Sahih Bukhari XDIII. The People of the Book

What are you going to do about that Holder? I will make you a deal, you ban Islam, close down every Mosque, end Muslim immigration, and deport every Muslim who can be deported, and I will stop educating the public to the dangers of Islam.

13 comments for “Logan’s Warning/NAI to DOJ ~ Islam Offends Me! It Violates My Civil Rights!”