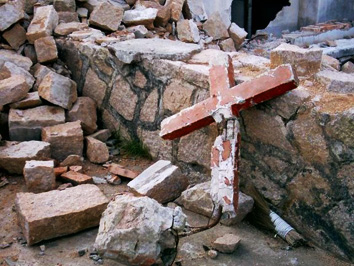 Well it certainly has not taken long for the newly elected Pope to bow down to Islam. Because unless he is going to tell Muslims their religion is a threat to Christians and Western Civilization, dialogue with Muslims will just lead to more appeasement of Islam. Considering he has been protective of Mohammad in the past, it will be the latter.

Pope urges dialogue with Islam, more help for the poor

VATICAN CITY (Reuters) – Pope Francis urged the West on Friday to intensify dialogue with Islam and appealed to the world to do more to combat poverty and protect the environment.

Speaking in Italian, the new pontiff said richer countries should fight what he called “the spiritual poverty of our times” by re-forging links with God.

“In this work (peace building), the role of religion is fundamental. It is not possible to build bridges between people while forgetting God,” he said.

The only bridge that will be built if Islam is not fought, is the one that non-Muslims will use as Muslims drive them out of their homelands!

Did the Pope miss the following hadith?

Back to the Pope:

“But the converse is also true: it is not possible to establish true links with God while ignoring other people. Hence it is important to intensify dialogue among the various religions, and I am thinking particularly of dialogue with Islam.”

Francis, the former Cardinal Jorge Mario Bergoglio of Argentina, said he was grateful that many Muslim religious and civilian leaders attended his inaugural Mass on Tuesday.

Which God would that be, the one of Christianity? Or the one of Islam who hates non-Muslims?

The following was revealed regarding [Banū] Qurayza: Surely the worst of beasts in God’s sight are the ungrateful who will not believe,

Dialogue, he said, “should help to build bridges connecting all people, in such a way that everyone can see in the other not an enemy, not a rival, but a brother or sister.”

Does the Pope not have knowledge of Islam? That I find hard to believe, so does he think Islam will be reform? Is he in denial, or does he just not care about saving the Church from an Islamic onslaught? What is your opinion??

48 comments for “Pope Francis Calls for Dialogue With Islam….”