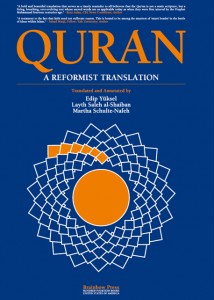 Brooke Goldstein, one of the purveyors of false hope,  finally produced a copy of the “Reform Koran”.

(For those who do  not know, “Miss Diagnosis” is a writer for the Huffington Post. Both her and my friend Jasser claim to be “reformers”. Both have blocked me on Twitter, and neither one has even attempted to help Brooke out against me. Apparently Brooke cannot figure why.)

Brooke is promoting a book that is full of human rights abuses, and calls for Islamic supremacy! Please keep in mind that she is a human rights attorney who believes this book of “reforming” Islam will lead to peace between Muslims and non-Muslims. She lives in an ignorant and naive fantasy world! Let’s take a closer look at what is in the “Reform Koran”…

Dominance by force if necessary:

3:83 Is it other than God’s system that they desire, when those in the heavens and the earth have peacefully surrendered to Him voluntarily or by force?

Islam allows slavery, is that not a human rights abuse?

The next one is a real beauty! I wonder if all “human rights” lawyers are supportive of killing a person for “spreading mischief” (Fasad).

Koran verse 5:32 It is because of this that We have decreed for the Children of Israel, “Anyone who kills a person who has not committed murder, or who has not committed mischief in the land; then it is as if he has killed all the people! Whoever spares a life, then it is as if he has given life to all the people.” Our messengers had come to them with clarification, but many of them are, after this, still transgressing on the earth.

Koran verse 5:33 The recompense of those who fight God and His messenger and seek to corrupt the land, is that they will be killed or crucified or that their hands and feet be cut off on alternate sides or that they be banished from the land. That is a disgrace for them in this world. In the Hereafter, they will they will have a great retribution;

Even the footnotes (p. 159) of the “Reform Koran” back up my point, and show just how dangerous fasad is.

Arabic word fasad means destruction, mischief, discord, warmongering or corruption. It is frequently contrasted with islah and its derivatives, which mean reform or promoting peace (7:56,85). Fasad is not mere faith or opinion; it refers to the acts of corruption or aggressive and destructive actions

Back in 2009 Iran was considering using fasad against BLOGGERS!

Anyone of us critics of Islam could easily be charged with it. Where in the “human rights” department does this law fall? But it does not end there. Apparently amputation is A-OK with this human rights lawyer. Brooke, did you even read the “Reform Koran”, or how about a Koran? It sure does not seem like it, and when it comes to Islam itself you make little sense.

Koran verse 5:38 The male thief, and the female
thief, you shall mark, cut, or cut off their hands/means as a punishment for their crime, and to serve as a deterrent from God. God is Noble, Wise

Brooke believes this book will bring peace. But it clearly divides Muslims and those who do not want to live under Islam.

Koran verse 5:51 O you who acknowledge, do not take the Jews and the Nazarenes as allies, for they are allies to one another; and whoever takes them as such from amongst you is one of them. God does not guide the wicked people.

Koran verse 48:29 Muhammad, the messenger of God, and those who are with him, are severe against the ingrates, but merciful between themselves.

Domination of non-Muslims, whether we like it or not.

Koran verse 61:8 They wish to put out God’s light with their mouths. But God will continue with His light, even if the ingrates dislike it.

Koran verse 61:9 He is the One who sent His messenger with the guidance and the system of truth, so that it will manifest it above all other systems, even if those who set up partners dislike it.

Just like Mohammad, Muslims of today are ushering in Islam whether we like it or not, and they will continue to do so unless Islam and Muslim immigration are dealt with head on. People like Brooke are spinning America a fairy tale of some non-Muslim friendly version of Islam coming down the pike. While great leaders like Geert Wilders are telling us the truth, that Muslim immigration has to ended if we are to have any shot of winning this war. “Moderates” did not come to the rescue in Europe, and they will not here. The sooner the country faces this reality the better. You’ve been warned!

← Gaffney’s Gal Goldstein: “Reform Koran”, Where Does She Come up With This Stuff?!
Translator of “Reform Koran” Shows up! LIES Right off the bat! →