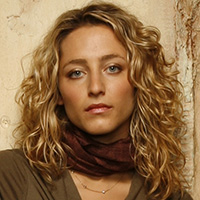 As Islam continues to gain a foothold in America, we unfortunately see so called leaders in this war continue to spread false hope and blatant misinformation. Several months ago we saw the Queen of False Hope Brigitte Gabriel, state that so called “moderate” Muslim Zudhi Jasser “truly” represents Muslims in America. Yet her or Jasser cannot even name ONE Mosque that is promoting his views.

Today we take a look at Brooke Goldstein, another woman who stands in Frank Gaffney’s Islam will reform, “moderates” are coming to the rescue fantasy camp. Must be like a fantasy baseball camp…. I am not going to say that she has done nothing good on this issue, but promoting the “moderate” Islam fantasy, is the equivalent of hammering a nail into the coffin of Lady America. It is not happening. Recently I had spoken to Brooke on Twitter, and it seems the woman has done little to no research on the Islamic scriptures. Her statements on Islam are outrageous! 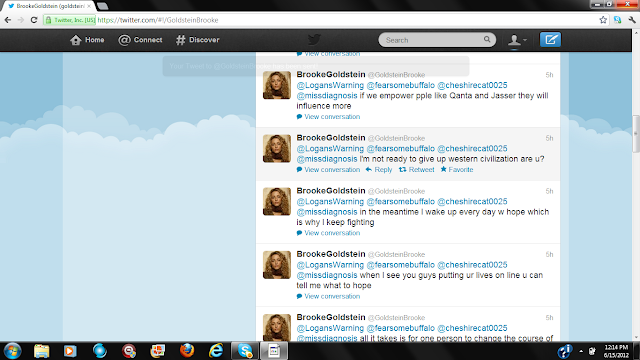 I asked Brooke to explain how infidels promoting so called Muslims is going to get the Islamic commnunity to follow them. She had no answer. 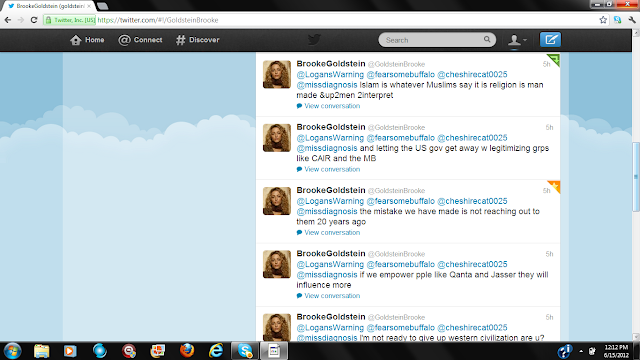 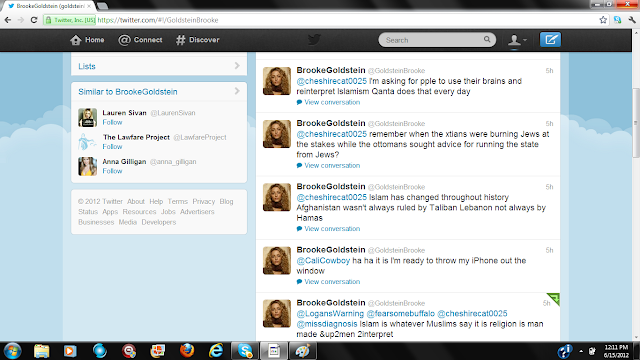 Does Brooke not know that Muslims believe that the Koran is the literal word of Allah? Brooke also ducked the fact that Koran verse 10:64 says its words cannot be changed.

Koran 010.064YUSUFALI: For them are glad tidings, in the life of the present and in the Hereafter; no change can there be in the words of Allah. This is indeed the supreme felicity.

I am sure her statement of Islam being man-made will go over well across the Islamic community. I am sure Muslims are running to side with her. Is this the best the no real answers Gaffney camp can do?

I and many others do lay their lives on the line Brooke, and you doing so does not excuse the ridiculous message your are sending to America. You cannot even back up your argument with any evidence that Jasser is changing history. That is why you ran from the conversation.

Are you kidding me?! Western governments have pratically been begging Muslims to change their agenda of world dominance. I hate to say it, but reality is not your strong point.

Hamas does NOT run Lebanon.

BrookeGoldstein ‏@GoldsteinBrooke
@cheshirecat0025 remember when the xtians were burning Jews at the stakes while the ottomans sought advice for running the state from Jews?

Christians are not burning people at the stake, but Muslims are looking to turn back the clock. Try dealing in today Brooke. Are you actually defending the conquests of the Ottoman Empire that helped Islam gain a massive amount of land? WOW…

What makes you even begin to to think the Muslim community cares what you think? Do you really think they will stand with what you want over Islam? Talk about delusions of grandeur.

I have to laugh Brooke. I’m just positive that statement will be homerun across the Middle East!

Finally you will get a look at Brooke’s most ridiculous comment. 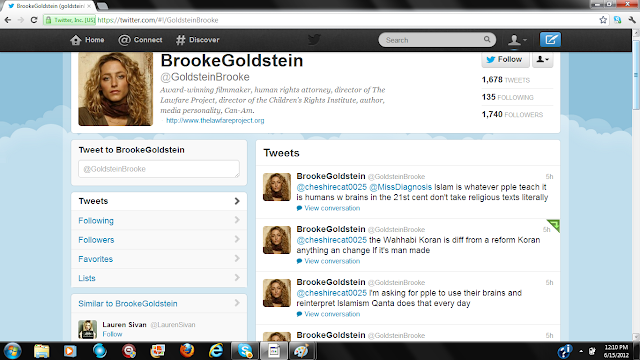 Is that so Brooke? Did Mohammad also have a different one? Please educate me. I asked her to produce a copy of this so called “reform” Koran, and to name just one major school or Mosque that suppports it. That’s when she turned in to the female version of Houdini. Is she blatantly lying to America, telling people what they want to hear? Or did someone feed her the misinformation? Was it Gaffney, Pipes, or maybe even Jasser himself?

With people like Brooke leading the way we will surely lose this war.

Brooke has been invited to brief government officials at the U.S. State Department, the White House, the UK Parliament, and at U.S. Central Command Seminars, and she has visited U.S. military schools and conferences to speak on issues of asymmetric warfare and human rights.

Until the “leaders” of America accept the fact that Islam itself is the problem and it is not reforming, we will continue to lose this war. Camp Gaffney has failed America.

23 comments for “Gaffney’s Gal Goldstein: “Reform Koran”, Where Does She Come up With This Stuff?!”