As of now this is the final segment of the “Hannity’s Muslim “Friend” Responds to Logan’s Warning” series. In this installment we see the true hateful colors of Hannity’s so called “friend”. A “friend” that Hannity’s has been giving a platform to for approximately two years. After reading this you’ll probably be asking yourself why Hannity and FOX could not see through this guy for so long. When it only took me two conversations to expose him for the hate-filled Islamoconman he is.

If our constitution were weak, or the right wing Christians were to be strong in America, they will “impose” God’s will as they interpret,  on all Americans like  forcing people against abortion,  beat up Gay people… bomb the abortion clinics, vandalize mosques, synagogues, Catholic Churches, Hindu, Sikh or Baha’i temples etc. They will make America nearly like Saudi Arabia which is a monarchy and cannot be called an Islamic nation. 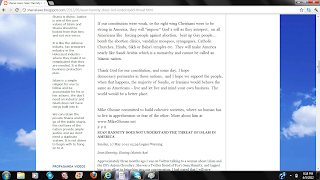 As you can see this Mike is a real piece of work, who is clearly using FOX News as a tool for Islam. I know plenty of conservative Christians and they are not calling for violence in America.

Thank God for our constitution, and some day, I hope democracy permeates in those nations,  and I hope we support the people, when that happens, the majority of Saudis, or Iranians would behave the same as Americans – live and let live and mind your own business. The world would be a better place.

Ghouse don’t insult Christians anymore by thanking your Christian hating God for the freedoms of America. Democracy in Egypt has strengthened the Muslim Brotherhood, it is not the save all for the Middle East, and once again you make a broad statement. You are not the spokesperson for the Muslim community, so do not pretend to be. You are just a two-faced Christian hating conman. You HAVE been exposed!!

Sean Hannity can be reached HERE.