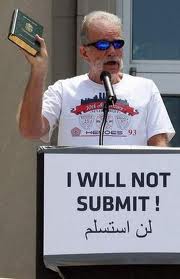 This Saturday afternoon we will be doing something different here at Logan’s Warning. We will be live streaming the Dr. Terry Jones’ (the burn the Koran Pastor) protest against Obama and his anti-Christian, pro-Islam agenda. Joining him will be special guest Dave Gaubatz, author of “Muslim Mafia”! An infiltration into the Council on American Islamic Relations (CAIR). Who knows what will happen at a Jones rally?! Will Muslims show up? Will the police harass them? Watch and see! The show starts at 1PM EST. (For the record, I do not agree with all of the Pastor ‘s view points or actions. But his life is in serious danger, and he is relentless when it comes to Islam. I applaud that.)

Have a great weekend friends!

Stand Up America Now will protest concerning the Obama Administration’s handling of Islam.

We will use the Koran in a physical way to illustrate and emphasize our disgust for the way our government is hiding and appeasing the dangerous, violent religion, that is Islam.

Also at the end of this demonstration, we will be praying for our nation. We refuse to recognize the government’s law that bans U.S. citizens from praying in front of the White House. This is a free country, even our money is printed with the statement, “In God We Trust”. Thomas Jefferson said, “When injustice becomes law, resistance becomes mandatory.”

If there is a problem with the video above please try HERE.