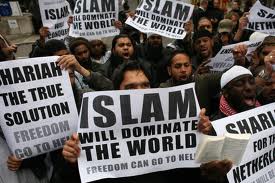 I was really not planning on doing another article on ACT! so soon, but the pubic needs to know just how weak-kneed the upper echelon of ACT! really is. Besides Brigitte Gabriel being on a two day banning binge on Facebook, last night another ACT! spokesperson dropped by and proved that ACT!, does not have the answers to the solve the problem of Islam in America. In fact some of their policies will actually make things worse.

The night with ACT! started off with Chris Slick leaving a comment, stating that I have “radical views”.

My response to him was the following:

Apparently “Mr. Slick” has no problem with what Muslim immigration brings to the West.

Submitted on 2012/03/07 at 8:29 pm | In reply to admin.
Tougher measures for those entering our country legally? Yes, absolutely we need tougher measures. But banning an entire faith group from immigrating into our nation is not the answer. Furthermore it is an exceedingly dangerous idea. What would happen if we banned all Jews from entering America because of their faith? Or Protestants? Since when is targeting an entire faith group ever an acceptable idea in America?

I did not know that Jews and Protestants were on worldwide campaigns threatening to impose a set of barbaric religious laws on all. Here is a clue Slick, they are not. Muslims are and that is why politicians like the great Geert Wilders are calling for an end to Muslim immigration. But apparently Slick knows better….

I will let the following videos do the talking, to show what ACT!’s weak-kneed policies will bring more of.

USA: Muslims break down police barriers in an attempt to get to Pastor Terry Jones.

UK: Islam marching across the UK.

Sweden: Malmo, changing to suit Islam. Violence in the streets.

I could easily post more of the same, but I think that anyone who does not work for ACT! will get the point. Did you like what you saw? Is that what you want for your future generations? Well we will get that and more, with ACT! “leading” the way.

Just as Muslim immigration is a slow suicide for the West, so are the overall policies of ACT!. Briggitt Gabriel, Guy Rodgers, Kelly Cook, and Chris Slick just do not have it in them to get this job done.

The entire conversation with Slick can be viewed HERE.

68 comments for “ACT! to Logan’s Warning: We do NOT Advocate Ending Muslim Immigration”