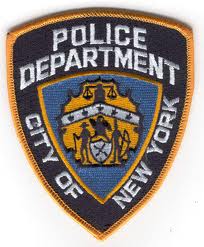 Over the years of debating with non-Muslims on whether there is a threat of Islam, I have heard plenty of excuses from Muslim/Islam apologists. One of them that has been repeatedly thrown at me, was that Muslims are nowhere near the majority. So they are not a threat. But that is far from the truth. My response is that Muslims do not have to be anywhere the majority to slowly takeover from within. They just need to continue whining about needs to be changed to suit Islam, while targeting certain agencies and institutions of power within America. They are doing so at an alarming rate!

Major targets of Muslims are the White House, US universities, the mainstream media and another has been the NYPD. In which they have launched a massive Islamic assault on! This is being done to weaken America, and at the same time give more power to Islam. It is another example of Muslims using our freedoms against us.

Back on August 25Th the Muslim American Civil Liberties Coalition (MACLC) c/o CLEAR – Creating Law Enforcement Accountability & Responsibility City University of New York School of Law issued a list of demands for the NYPD, after they had learned the CIA and NYPD had been gathering information on the Islamic community.

MACLC calls on:
• the New York City Council to investigate and oversee the NYPD’s operations, as well as a City Comptroller Audit;
• the Obama Administration to initiate a federal investigation into the extent to which the CIA has engaged in domestic spying within the United States, in violation of law and its manadate;
• Congress and the New York State Senate to hold hearings into the NYPD’s, FBI’s, and CIA’s surveillance and policing practices in Muslim communities with a focus on the role of informants;
• Congress and New York State Senate to pass enforceable anti-racial profiling legislation;
• NYPD and the Department of Justice to revise their internal guidelines to disallow the use of surveillance and informants absent suspicion of specific criminal activity.

To make matters worse, not only Muslims are in on weakening the NYPD. CLEAR is part of the City University of New York (CUNY), and they are providing free legal services to Mosques in order to deal with informants! On the taxpayer dollar no less! 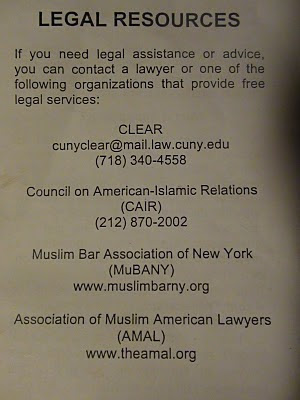 Talk about destruction from witin!

Since then the Islamic war on the NYPD has not missed a beat. On December 23Rd an Islamic conference honoring Brooklyn’s Islamic preacher of hate Imam Wahhaj, was held at the Hilton NY. One of the messages of the conference was not to cooperate with the police, while other information on dealing with authority figures was provided. 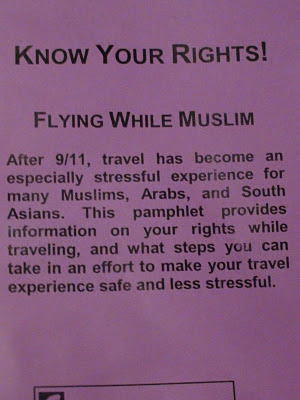 Once again, Muslims were told to contact CLEAR for help.

The following month on January 26Th, one of the biggest enemies of America, the Cancer on America Islamic Relations (CAIR) held a City Hall press conference. In which the NYPD was the target. The conference was lead by the Hamas connected Linda Sarsour.

As you can see at the very beginning of the video. She was actually trying to acquire the names of those in attendance.

Muslims and their dhimmis lay out their demands!:

Amna calls for the retraining of the policemen who watched the Third Jihad. In other words she wants any negative thoughts about Islam erased from their minds. She also said there is no proof that links terrorism and Islam. Does she not know her own scriptures, or is just lying like Mohammad instructed her to?

(The white woman with the head scarf at the 2:23 mark is Megan Putney, the Program Director of the Muslim Consultative Network. She recently gave a speech during an interfaith meeting which took place at NY’s Judson Memorial Church. In the speech she said, and I quote….“Islam is against any oppression”. Yea OK….you fooled me Megan. I know she was shown the Logan’s Warning article on that event, but she never responded to back up her ridiculous claim.

Next up to do their part in weakening America is Imam Al Hajj Talib Abdur-Rashid, President of the Islamic Leadership Council of New York. The Imam is a Sunni Muslim.

Rashid stated the film is a bigoted, and “Islamophobic”. So once again I ask….how does not wanting to be dominated by Islam, make one a bigot? What is a non-Muslim supposed to like about Islam? Imam, Islam is what is poisoned, not the minds of the police officers who watched the fim. Islam is a poison to America, as are you!

Coming to the aid of Muslims in America is Vincent J. Gentile. Democratic City Councilman out of Bay Ridge Brooklyn (718-748-5200).

My question is to Vincent is, when aren’t Muslims “offended”? When aren’t they whining? It is just a game to make America more Islam compliant. Is that too hard for you to see, or do you want your grandchildren living under Islamic rule?

Unfortunately the crying game is not over, and next up to take a stand for Islam the
Reverend Chloe Breyer, executive director of the Interfaith Center of New York.

Chloe is another suicidal Christian, who has even helped rebuild a Mosque in Afghanistan. Chloe, how are the Christians in Afghanistan doing? Seriously, what is wrong with you?!

As I have been saying, our laws are not cut out for this war and have been turned into a tool of Islam. If laws specifically targeting Islam are not implemented, we will eventually lose this war.

What you have seen here is just part of the attack on the NYPD.  Trust me….there will be more.

40 comments for “America Under Attack: Muslims Take on NYPD!”