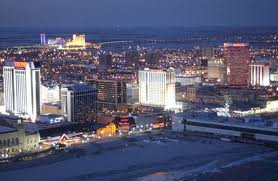 This latest installment of the “Islam/Sharia Law 101/Islamic Schools & the Sharia Movement Within America” segment of Logan’s Warning, will take us to Atlantic City. Where the gambling and nightlife is plentiful, and the call for Sharia is creeping in.

Tonight we take a look at Masjid Muhammad of Atlantic City.

Masjid Muhammad is a multi-cultural religious community established in the City of Atlantic City, New Jersey. Our mission is to spread the beautiful teachings of Al Islam to the citizens of Atlantic County and the surrounding areas. We serve our community by providing many needed services such as a Food Pantry, Interfaith activities, Social and Marital counseling, and much more. We hold the five daily prayers in our 10,000 Sq ft facility. In addition, we conduct daily classes in the various Islamic disciplines.

Now I am against irresponsible drinking, but I am also against what Islam prescribes for Muslims and non-Muslims for drinking alcohol.

From the Reliance of the Traveller, A Classic Manual of Islamic Scared Law. (The manual has the stamp of approval of Egypt’s Al Azhar. The world’s highest learning Islamic learning school.)

O16.2 The penalty for drinking is obligatorily enforced against anyone who:

016.3 The penalty for drinking is to be scourged forty stripes, with hands, sandals, and end of clothes. It may be administered with a whip, but if the offender dies, an indemnity is due for his death. If the caliph increases the penalty to eighty stripes, it is legally valid, but if the offender dies from the increase, the caliph must pay an adjusted indemnity, such that if he is given forty-one stripes and dies, the caliph must pay 1/41 of a full indemnity.

Alcoholism is a disease. Does that mean he or she should possibly be beaten to death for it? According to Islam, it is OK. That is barbaric and devastating to the family of the alcoholic. Should a casual drinker be beaten to death?

According to Koran drinking is a sin.

Koran verse 002.219
YUSUFALI: They ask thee concerning wine and gambling. Say: “In them is great sin, and some profit, for men; but the sin is greater than the profit.” They ask thee how much they are to spend; Say: “What is beyond your needs.” Thus doth Allah Make clear to you His Signs: In order that ye may consider-

But that was not enough for the barbaric Mohammad. He said all drinks with alcohol are forbidden.

Allah’s Apostle was asked about Al-Bit a liquor prepared from honey which the Yemenites used to drink. Allah’s Apostle said, “All drinks that intoxicate are unlawful (to drink).”

Mohammad and his merry men also thought beating alcoholics and drinkers was fine.

We used to strike the drunks with our hands, shoes, and clothes (by twisting it into a rope in the shape of lashes) during the lifetime of the Prophet, Abu Bakr [ruled 632-634] and the early part of Umar’s caliphate [ruled 634-644]. But during the last period of Uthman’s caliphate [ruled 644-656], he used to give the drunk forty lashes; and when drunks became mischievous and disobedient, he used to scourge them eighty lashes

As for the age minimum required to lash out these punishments, the average age of puberty is 7 and 13 in girls, and ages 9 and 15 in boys. Yes, beat the children to death or near death for drinking. Makes perfect sense…

For Muslims in an Islamic state.

If a non-Muslim breaks their “agreement”, the penalty can be life ending, or slavery. Living under constant fear of such barbaric laws might drive a person to drink.

Back to the AC Masjid:

Our educational approach is based on the famous hadith of the angel Jibril which mentions three divisions of our religion: Islam (Religious Practice), Iman (Religious Faith), and Ihsan (Spiritual Perfection). These three aspects are represented in the Islamic sciences of ‘Aqidah (Creed), Fiqh (Jurisprudence), and Tasawwuf (Sufism). We believe that mastery of these three essential sciences are extremely important toward developing a complete believer and a healthy Islamic community.

How about sticking to the laws of America, instead of trying to take over from within? Of course that is not going to happen.

We adhere to the traditional school of Ahlus Sunnah wal Jama’ah ( The People of the Prophetic Way and The Majority of the Islamic Nation). In Aqidah, we are following the methodology of the knowledgeable scholars of Islamic Theology. In Fiqh, we are following the teachings of the famous Imams of Islamic Jurisprudence as conveyed by a continuous chain of narrators until our time. In Tasawwuf, we are following the traditional spiritual paths which were expounded upon by the pious scholars of the science of Islamic Spirituality. This is the way of Ahlus Sunnah wal Jama’ah, which is the way of the majority of the Muslim nation, past and present.

As I have said over and over. Muslim immigration and Mosque construction have to be banned, if we are to win this war.

Teachers of the Masjid: 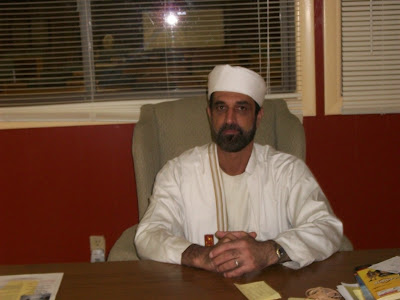 Shaykh Imadudeen Abu Hijleh was born in Palestine. He studied the Islamic sciences under traditional scholars and received ijazas in Aqida, Qur’an, Hadith, Fiqh, and sub-sciences according to the Shafi’i school. He founded and taught at the Razi Institute in Massachusetts, an educational institute dedicated to the Islamic sciences. He has taught courses at Harvard University and Manchester College through their respective Muslims Student Associations, as well as the “40 Hadith of Imam Nawawi” at the Summer Intensive for Western students at Dar Al-Mustafa in Tarim, Yemen, in 2008. He is the author of the book “An-Nujum ul-Lami’a,” an 850 page book including topics such as Aqida, Fiqh, Seerah and Sufism. He is currently based in Tarim Yemen, with his Shaykh Habib Umar, and writing additional works on Fiqh in the West, covering topics such as fasting, family relations, inheritance and dawah.

For the record, the Reliance of the Traveller’s main resource is the recension of Imam Nawawi. What was that I said about ending Muslim immigration?

Dr. Shaykh. Samir an Nass is one of the foremost religious scholars of his generation in Syria today. He is an expert in virtually all of the Islamic disciplines of learning, specializing in Qur’an, fiqh, hadith, and tasawwuf. He is one of the highest ranking scholars of tajwid in Damascus. In addition to this, he is medical doctor with a private practice. He did his residency and fellowship in America and continues to practice medicine in Damascus.

Shaykh Jamal Zahabi was born in 1957 in Lebanon. He began his traditional Islamic educational training at the age of 12 when he entered Mahad al-Fatah, a rigorous madrassah in Damascus, Syria. After spending 6 years there he went on to complete a degree at the prestigious Azhar Islamic University in Cairo, Egypt. He later did his Masters degree at the Imam Muhammad ibn Saud University in Riyadh, Saudi Arabia where he studied with Shaykh Abd al-Fattah Abu Ghuddah (rahimahullah). His Masters thesis was in the sciences of hadith with a particular emphasis on rare manuscripts of early hadith works. Shaykh Jamal has studied with some of the leading scholars (ulama) of our time including: Shaykh Abd al-Razzaq al-Halabi (a master of jurisprudence and the sciences of recitation), Shaykh Adib al-Kallas, Shaykh Ibrahim Ya`qubi, Shaykh Mahmud Ranqusi, and Shaykh Uthman Siraj ad-Din among others.

There are two more featured teachers, but hopefully you get the point by now.

In November of 2011, the Masjid put out a plea to raise $53,000. Hopefully they did not receive the funding. As the country needs less Islam, not more!

63 comments for “Masjid Muhammad of Atlantic City ~ Imam’s from Lebanon, Palestine, and Syria, Calling for Sharia ~”