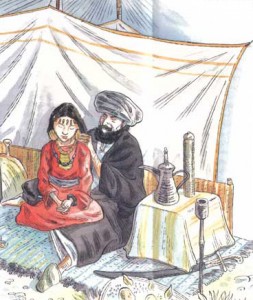 Over the years I have spoken to a long list of Muslims, and one thing they will not do is criticize the actions of their leader and hero, Prophet Pervert Mohammad. The reason I call him Prophet Pervert is because that is exactly what he was, and a man like him should be looked down upon, not respected!

One of the first signs of him being a pervert was that he married a six-year-old girl named Aisha.

At the time of the “marriage” Mohammad was over 50 years-old. Other than being a pedophile, why would a man of that age marry a girl of six? Besides marrying the little girl, Mohammad admitted he had lust filled dreams of her at an even earlier age.

Allah’s Apostle said to me, “You were shown to me twice (in my dream) before I married you. I saw an angel carrying you in a silken piece of cloth, and I said to him, ‘Uncover (her),’ and behold, it was you. I said (to myself), ‘If this is from Allah, then it must happen.

When you think of a human being carried in a cloth, what do you think of? A baby, that’s what!

Many Muslims have told me that girls grew up faster back then. Well, I do not know any women who play with dolls. Obviously nothing phased Prophet Pervert when it came to his sexual desires.

I used to play with the dolls in the presence of the Prophet, and my girl friends also used to play with me. When Allah’s Apostle used to enter (my dwelling place) they used to hide themselves, but the Prophet would call them to join and play with me. (The playing with the dolls and similar images is forbidden, but it was allowed for ‘Aisha at that time, as she was a little girl, not yet reached the age of puberty.) (Fateh-al-Bari page 143, Vol.13)

Mohammad apologists will also claim times were different back then. Yes they were, but I do not see how any man in their right mind would be attracted to a little girl. Even more troubling is that the Koran states the actions of Prophet Pervert, are to be followed for all times.

So unfortunately, this absolutely sick behavior still exists in Islam.

Video: Dr. Ahmad Al-Mub’i, a Saudi Marriage Officiant: “It Is Allowed to Marry a Girl at the Age of One, If Sex Is postponed. The Prophet Muhammad, Whose Model We Follow, Married ‘Aisha When She Was Six and Had Sex with Her When She Was Nine”

If you are thinking this type of behaviour is confined to the Middle East, and could never brought here, you are mistaken.

NY’s Imam Baqi supports the actions of the Prophet Pervert, which says a lot about his moral character. He calls the actions of Mohammad, “a most beautiful pattern of conduct”

Not only did Mohammad marry a child, he also married what was his daughter-in-law! How sick is that?

Even after marrying a child, and his daughter-in-law, Prophet Pervert was still not satisfied. So in his attempt to fulfill his sexual addiction he raped sex slaves.

His insane perversions are not yet finished. Not only did Mohammad OK the rape of sex slaves, he also encouraged his cronies to impregnate them!

This is the behavior of a man of peace? Of course not, and the poison Mohammad brought to the world is spreading through the veins of America. As NY’s Imam Baqi (video above) is not the only Muslim leader in America, who thinks Mohammad is a great role model. Jaam’e Masjid Bellmore, of Bellmore Long Island also supports this view.

Then there is the Islamic Center of Tacoma, which states the children they teach shall follow the example of the world’s most famous pervert.

The primary purpose of Islamic School of Tacoma is to help each child develop concepts, disciplines, and principles relative to their unique Islamic identity. And the goals of our program are centered around raising the Islamic standards for the Muslim youth at home, and in the school environment and in the community. With sound Islamic education the Muslim youth will be prepared to make intelligent choices based on the guidance of the holy Quran and the Example of the Prophet Mohammed (SAW) . The curriculum includes Quran, Arabic, and Islamic studies.

America has enough problems of her own, do we really need Muslims bringing this line of thinking here? I urge you all to echo my call to end all Muslim immigration.. Life as we know it is on the line for our future generations, and we are the last line of defense! Please do your part! (All within the law, of course.)

← US Politician Calls for All Muslims to be Discharged From Military!
Canada ~ Reviving the Islamic Spirit Conference ~ To Take Place on Christmas! →