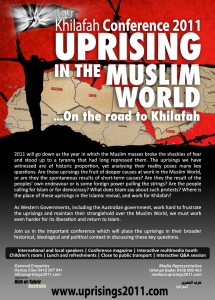 On July 3rd the Islamic organization Hizb ut-Tahrir held a conference in Australia. One of the speakers at that conference clearly laid out the Islamic goal for the world, as he called for “radical change”. This change is Sharia, whether we like it or not!

Please watch at least the first 8 minutes, and you will see what I stated and how they use their oil against us. The plan is clear!

Those who want Sharia should NOT be allowed to assemble in our home. Would you let your enemy stay in your house?!

← UK: Muslims Call for 3 Towns to be Placed Under Sharia!!
IslamoPUNK Anjem Choudary’s 7/7 Message: Remove the Troops or Else….Video! →

36 comments for “Australia: Muslim Conference Calls for Sharia Whether we Like it or not! ~ Video”