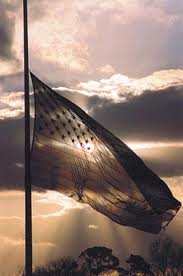 Beware America, I bring you news of your own death; “a pale shroud laid out by your own hand”.  IDIOTICALLY, you have given religion status to an enemy invader called Islam; thereby egregiously violating the foremost principles of national security, sovereignty and warfare: An enemy invader must never (never) be classified as a religion.

Doing so is equivalent to a mad doctor injecting deadly cancer cells into a healthy patient in this case America. Look how Muslims are “shoving mosques down our throat” even at the hallowed “ground zero” of 9/11. They “thumb their noses” and jeer us, adding insult to injury. Why?  Islam is “programmed” to bring down America and knows no limits.  M.A. Khan in his excellently informative book, Islamic Jihad: A Legacy Of Forced Conversion, Imperialism And Slavery states:

Perhaps this is why Dr. Wafa Sultan has named her book A GOD WHO HATES emphasizing Islam’s God (Allah) hates all things non-Muslim and utilizes this hatred to fuel the fervor for global Islamic rule mentioned by M.A. Khan above.  Needless to say, any ideology with a bigoted, hateful and murderous God should be prohibited religion status in all civilized nations. Please see my article, “Demoting Islam’s Religion Status” for further clarification.

What’s next? Don’t be surprised if Muslims demand it’s their religious right to tear down the White House and replace it with a mega mosque, give them an inch and they will take a mile. In the same way that a blood thirsty tiger cannot survive without devouring its prey. Islam cannot sustain itself without devouring other nations and ideologies. This is a fact — not an opinion — 1400 years of Islamic history prove the case a million times over. Steven Emerson’s Investigative Project on Terrorism gives hundreds of up to date examples verifying the dubious nature of Allah’s minions. I dare say, that those so called experts who consider Islam to be a religion are not competent in the field of ideology, philosophy, religion, history, sociology or warfare.

Rather than experts, these are “bloody fools” who cannot distinguish between a wooden nickel and a gold coin, and there are legions of them infesting our universities, the media, the state department, the justice department, the military brass, the CIA, the department of defense, the FBI, the NSA, and related government agencies.

Deplorably, the very persons who are paid to defend us are actually aiding and abetting the overthrow of America by permitting Islam to be categorized as a religion on their watch. There can be no hope for the survival of America long term unless our leaders immediately  reverse course by vociferously stating that Islam is not a religion in broad daylight on a wide scale.

Verifying this epidemic of incompetence and dereliction of duty is the book entitled: Sharia The Threat To America:  An Exercise In Competitive Analysis:  Report Of Team B II, it states:

“This information is not even being taught at the basic level to FBI counterterrorism agents and analysts, nor is it taught at the Justice Department, Department of Homeland Security, The State or Defense Departments or the CIA . . . We have an enemy inside our perimeter. But for this nation, the challenge is not just the inability to distinguish friend from foe. Rather, it is an unwillingness to do so.”

Returning to our medical analogy,  this means that “physicians” paid to treat “cancer” are not allowed to study anything about “cancer” or even mention the name. What a laughing stock and painful embarrassment Americas defenders have become in the face of the Islam’s ideological blitzkrieg. They might as well just all pack up and go home!

In his insightful article, “What Is Islam” Amil Amani cuts to the crux of the matter by voicing a similar opinion:

“Islam is not a religion, but a harmful thorn; thus, we must make laws to fight this unwanted thorn growing like mushrooms in our backyards . . .  Islam is not a religion by any standards. It is a militant, political and savage cult created by one man: Muhammad. It is time that we treat Islam as the greatest threat to the human race. . . Islam is a comprehensive totalitarian form of slavery, it is the opposite of freedom.”

Our leadership urgently needs to heed the wise consul of Amil Amani. Surely the “experts” can only be considered competent to the extent  they agree with him.  Amil Amani is not alone in his convictions.  Author Rebecca Bynum in her book , Allah Is Dead: Why Islam Is Not a Religion states a similar theme:

“Islam is a recipe for perpetual war . . . I believe Islam to be the duck-billed platypus of belief systems . . . If however, Islam continues to be classified as a religion and given the full protection and benefits religions receive in America, then we will be helpless to contain it . . . That is why Islam cannot remain in the religion category . . . “

Rebecca Bynum clearly states that Islam as a religion cannot be contained.  The evidence is  blatantly apparent; Muslims make up only 1 to 2 percent of our population but look at the enormous amount of havoc, disruption, and chaos they reek upon our society.

Under the cover of a religion Islam has been given a free pass to sabotage America from within, and has made enormous progress since 9/11, increasing geometrically, becoming more pugnacious, belligerent and  demanding. This means 9/11 has caused America to cower down ideologically and submissively roll out the red carpet to Islam; all this, because we have given an obvious enemy invader the privileged and protected status of a religion. “How stupid can you get?”  Author Craig Winn in PROPHET OF DOOM has attempted to wake us up by declaring:

“The Qur’an condemns all non-Muslims — Christians and Jews and those who worship many gods and no gods. It is an equal opportunity hater. . . In fact, the Qur’an was written to justify some of the most ungodly behavior the world has ever known. . . The simple truth is: good Muslims are bad people.”  Our homegrown America born Jihadist,  the “Fort Hood Shooter”, Major Nadal Malik Hassan proved he was a good and devout Muslim by murdering 13 and wounding 32 unarmed innocent colleagues inspired by his hateful God Allah.

Now ask yourself, how can any ideology that is referred to as an “equal opportunity hater” and rightly so, ever be given the privileged status of a religion in the civilized world. The truth be told, Islam is the epitome of a barbarian invader, bigoted, totalitarian, pillaging and enslaving. Paraphrasing the wisdom of Winston Churchill, “Islam is the most retrograde of forces.”

Once something has been labeled a religion, no American will question, challenge or think objectively about it. Call yourself a religion and Americans turn into zombies letting you do anything you want, even “kill them”. The greatest military power in world history lays supine, lily livered, gutless and enfeebled, and it’s all because we have wrongly given Islam the protected status of a RELIGION. “Good Bye America it’s been nice knowin ya” Surely, this is the bleakest hour in American history when our nation cannot tell friend from foe, nor religion from invader.

There is no doubt that we Americans suffer from a collective mental illness, mental block, emotional imbalance, and psychological disorder, precipitated every time we hear the word religion. Let’s call it schizo-religionitis.  Mention the word “religion” and we immediately become deaf, dumb and blind, suspending all rational thought and common sense. Here is the childishly insane logic Americans apply to their criteria for a religion:

The absurd conclusion is that drinking a cup of anything liquid is good for you whether it be apple juice or poison. Just hang out a sign with the word religion on it and Americans will instantly “drink up” any poison you feed them.

In other words, it’s “one bullet”  to the back of our head, with the “kill shot” coming from our own servile leadership. I am harping on this point because the wall of denial is extremely thick, marked by an “epidemic” of shallow mindedness, apathy, flagrant intellectual dishonesty and rampant monetary corruption; the whole quagmire tainted by middle east oil money engulfing our entire military industrial complex, intelligence community, political leadership, media, academic and religious communities. Christopher Logan has written a brilliantly insightful satire called “United States Department of Jihad!” revealing the subversion of our own leadership.

The best thing all Americans can do is tell the truth that Islam is an enemy invader — not a religion. Doing otherwise is equivalent to “cutting the throat” of America, which our leaders and citizenry do on a daily basis, while “sitting up” for Muslim oil money like puppies doing tricks for doggie biscuits.

One thing is certain, every Imam in the United States is putting on a smiling face and speaking in a sickeningly sweet voice while touting the immaculate splendors of Islam, as they guide their flock to infiltrate and trash this nation” by hook or by crook” as emphatically commanded by the Koran which is irrefutably a manual of war and blood thirsty totalitarian conquest rather than a sacred and holy book.

Martel Sobieskey has 40 years research experience in the field of religious conditioning and its relationship to warfare, and is greatly alarmed by our leaderships failure to recognize  the deeply entrenched Jihadist conditioning inherent in all of Islam, moderates included.

← Prosecutors Seek to Stop Rally by Florida Pastor Outside Dearborn Mosque
~Muslims Manipulate The Minds Of Our Youth!~ →

87 comments for “Why Islam is Taking Over America”