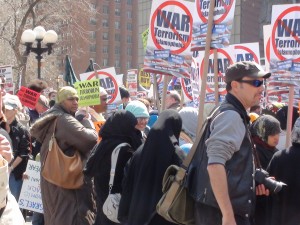 Yesterday, I set out to report on NY’s “4/9/11! ~ Muslim “Peace” Coalition To Hold CODEPINK-Endorsed Anti-”Islamophobia” Rally!~”. The location was 14Th and Union Square. As I was walking towards the event on a beautiful NYC day, I noticed signs of it even blocks away. 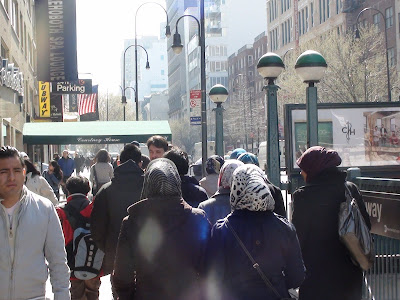 Upon arriving early, I decided to check out the set-up team. 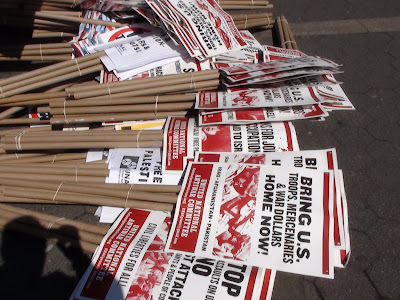 This was obviously obviously a well-funded event, led by a pro-Islamic, anti-war movement. I want to end both wars, but that does not mean you have to side with Islam at the same time! 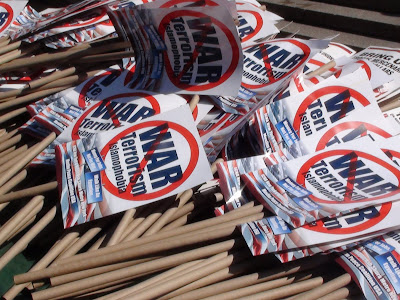 Those were not the only issues at hand. There was also a major anti-Israel, pro-Paleterrorist component. 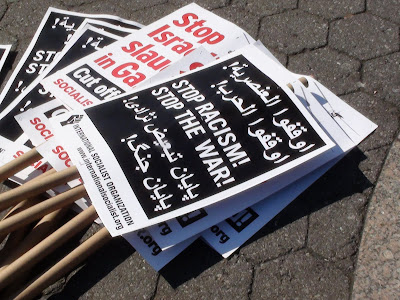 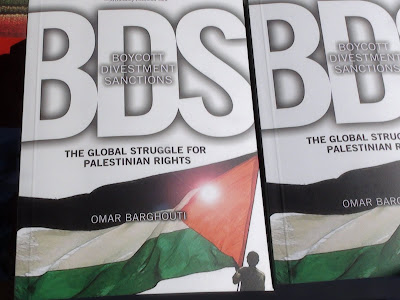 There was still time before the speakers took to the stage for the noon hatefest. 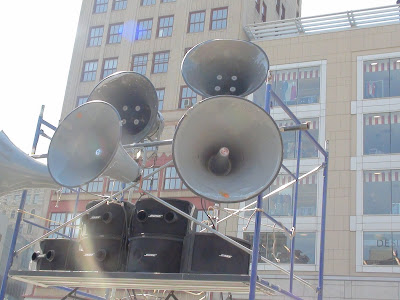 While I was surveying the crowd, I noticed two Christian men. One of them was standing on a footstool peacefully preaching within the gated area, which I will call the inner circle. Keep in mind, it was still before the Islamic start time. After watching him for a minute or so, I noticed that others watching him were not too happy. Minutes later, I decided to leave the inner circle, and saw the men across the street. 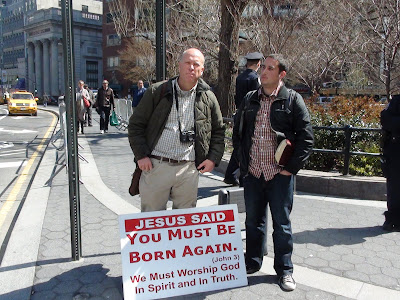 I had spoken to them about the insanity of so-called Christian “leaders” promoting Islam. They said it was a sin to promote Islam. Wanting to see what else was happening, I left the two. About 30-40 minutes later, I went into the smaller section outside the inner circle in which I saw Shawn “the Baptist”, peacefully preaching again. When he stepped down, I asked why he was not in the inner circle anymore. At that point, he agreed to do an exclusive interview.

Now that is non-Muslim enforcement of Sharia at its NYPD’s finest! Please do not think it was done for the safety of the Christians, because the place was covered with police, and some of them would have stood with Shawn as he preaching withing the outer circle. They did not. While I was filming, I noticed a group of Muslim men off to my right. The Muslim man with the cup had made a jester towards Shawn. He was not happy….whatever happened to “interfaith dialogue”?!

I applaud Shawn and his friend for having the courage to stand up for their religion!

Now the Islamoshow is about to start. Do you like opening acts? Did you ever hear of the Blue Man Group? Well, they were not there but the Gitmo Guys were!

The show starts! You will now see how well-funded and organized they are! WORLDWIDE rallies were taking place.

Joanne was boring, and her singing does not make the threat of Mohammadism magically disappear…

Now for the main act! Muslims sponsored by the Islamic Circle of North America (ICNA) call for unity of NY’s approximately 200 houses of Islamic worship in their attempt to take us over from within.

As you can see the enemy is within the gates, YOU should not be happy about this at all! Tomorrow, the call for their militant movement, and the Islamicnake….

Please help me continue to free up more time to expose the nation’s internal threat of Islam. Any sized donation would help our movement. It can be made via PayPal, or by sending a check or money order to P.O. Box 313336 Jamaica, NY 11431. Please make checks or money orders out to “Christopher Logan”. Thank you for pitching in!