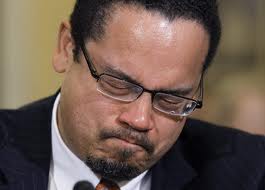 Last night on the Bill Maher Show, Congressman Keith Ellison, (Democrat – Minnesota) made the following statement. “It’s out of context”, he told Maher, claiming that the translations are wrong. How many times have we heard these IslamiCONs before? He provides no evidence whatsoever to back up his claims, so why would anyone believe them?!

As you witnessed, Ellison brought up the subject of Koran verse 5:32, but he conveniently left out its most important element, namely the part about “spreading mischief” in the land.

Koran verse 005.032
YUSUFALI: On that account: We ordained for the Children of Israel that if any one slew a person – unless it be for murder or for spreading mischief in the land- it would be as if he slew the whole people: and if any one saved a life, it would be as if he saved the life of the whole people. Then although there came to them Our messengers with clear signs, yet, even after that, many of them continued to commit excesses in the land.

3 a : action that annoys or irritates

(More on fasad in the following video.)

Koran Verse 002.256
YUSUFALI: Let there be no compulsion in religion: Truth stands out clear from Error: whoever rejects evil and believes in Allah hath grasped the most trustworthy hand-hold, that never breaks. And Allah heareth and knoweth all things.

What he failed to mention is that if non-Muslims do not convert to Islam, Muslims are to fight them until they are extorted and dominated.

Sorry, Keith, you are obviously trying to cover for Islam’s ugly truths.

On this site you FAIL! I am now inviting you to prove me wrong…

I am emailing Congressman Ellison this link at an address which can be found HERE.

Invite Congressman Ellison To Attend Or Speak At An Event

Title or Topic of Event: Debate on Islam

Talking Points or Relevant Details to Speech: I saw you on the Bill Maher Show, and wish to debate you on the Islamic scriptures

Let’s see if I get a return call or email!

← Islamic Society of N. America: Encouraging Muslims to Obtain a Foothold in Governmental Agencies
Logan, Geller, and Spencer Take it to the Streets! →

48 comments for “My Challenge to Congressman Keith Ellison!”