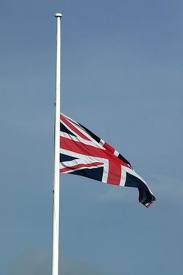 The problems that Muslims are causing in the UK are just the tip of the iceberg of the global war with Islam. The tensions across the world between Islam and non-Muslims are on the rise because Muslims invaded our lands and are exploiting the West’s politically correct disease on a daily basis. Just as Hitler didn’t hide his venom-fueled agenda, neither do the Sharia-loving Muslims of the UK. When the UK foolishly sanctioned the Sharia Courts, Muslims quickly moved onto their next demand, which is Sharia for all!

“On this day we will call for a complete upheaval of the British ruling system its members and legislature, and demand the full implementation of Shari’ah in Britain.”

When the Sharia Courts were opened, the PC crowd told themselves that the Courts would make the relations between Muslims and non-Muslims better. But when we examine the Courts’ agendas, we see that is very far from being true.

Even though Muslims are waiting to sink their fangs into the freedoms of the UK, the non-Muslims’ response has mostly been one of appeasement. Not only are some UK Churches fighting “Islamophobia”, the government has actually funded the spread of Islam. This was an attempt to create some sort of “moderate” Islam movement. All the while, Islam continues to destroy from the UK from within. As converts to Islam are calling for Muslims to join the jihad and are threatening to subjugate non-Muslims under Sharia law. This obviously weak, FAILED policy needs to be shown the door and replaced with a strong, anti-Islam policy before it is too late!

Because of the weak government response to the threat of Islam, Muslims continue to unite in a show of force. They behave like they control the country.

But recently, an increasing number of non-Muslims have begun to face the reality of this threat and unite against their country being devoured by Islam. The de facto leader of this movement is the English Defence League (EDL). Unfortunately, the EDL are forced to fight two enemies at once! These namely are non-Muslim supporters of Islam as well as the Muslims who want to dictate policy and dominate in the UK.

Thursday’s attempted ambush of the English Defence League’s Kevin Carrol is an obvious sign that Muslim versus non-Muslim tensions in the UK are on the rise. Now the question is: how will this event affect February 5Th’s EDL rally? Our mates from the UK will be coming out in a massive show of force in the town of Luton.

UK non-Muslim David Woolmer said: “I and a number of colleagues are going on the EDL Rally in Luton next Saturday 5 February. It promises to be by far our largest rally yet(5000 are expected). As many on this board may know Luton is a hotbed of Islamists, over 25% of its inhabitants are Muslim.

I will report back soon after 5 February.”

In response this rally many non-Muslims have once again jumped into bed with Islam. 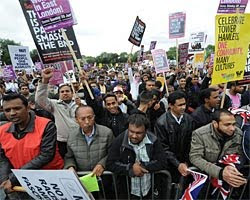 Luton: stop the English Defence League where it started

On Saturday 5 February, the racist English Defence League (EDL) is going back to where it all began for the group—Luton.

The EDL was formed in the town in March 2009, using the excuse that a small group of Islamists had protested against a soldiers’ homecoming parade.

In April and May, racists charged through the streets as the EDL poured hundreds of thugs into Bury Park, the heart of the Asian community.

The EDL, and its sister organisations in Wales and Scotland, say it exists only to oppose “extremist Islam”.

This is a bed that future generations of non-Muslims will wish their parents never willingly shared!

Besides what you have seen in the video, the rhetoric is clearly ratcheting up on both sides.

You got the whole thing wrong; the U.S army invades innocent Muslim lands all over the world and you say that Obama invests in them, well you must be having a confusion day. It is on the contrary and thank to your fascist and racist government, you have not been killing but murdering innocent Muslims in Afghanistan with your CIA-created 9/11 attacks as well as U.S controlled U.N that bribed the everyone and thus gave a green light to a lie of “45 minute claim” of WMD. Now your double standard and hypocritical foreign policies are speaking again; in Egypt, for example. Mubarak is going but now you have a choice; you want the military to run the country because you don’t want the Islamist (the Muslim Brotherhood) but we know that you don’t like Islamists because they replace your democracies with the Sharia – the Divine Law; instead you want to give annually $1.5 billions to the Egyptian army so that they don’t bring the pure and peaceful law – again the Sharia. But your empire and time will come to an end just like the time of your puppet H. Mubarak so we are just waiting for that to happen and we know it will happen Inshallah. But at the moment, we are hunting your troops like pigs in Afghanistan; your capitalism is the same as communism – all man-made laws. So await for your enemies’s arrival from Kabul to Jerusalem.

Appeasement is only exploited by the “appeasd” as a sign of weakness. The only answer now is for non-Muslims to push back and to keep the Britishness in Britain! The EDL might just be the savior of the UK.

“Luton will be the biggest test yet of what the EDL has become” (Newsnight Reporter).

In advance of this Saturday’s EDL demonstration in Luton Tommy Robinson (real name Stephen Lennon), the founder of the protest group was invited into the Newsnight studio for a grilling by Jeremy Paxman.

Starting with a precis of Robinson’s/Lennon’s background, the 28 year old was described as“Luton born and bred”. He was pictured at his business (a tanning salon) donning a bullet-proof vest before venturing out onto the streets of Luton. The reporter questioned the need for such apparel, evidently viewing it as a piece of unnecessary posturing, but Robinson claimed that both his house and business had been attacked by Muslims and that his personal security was under real threat.

28 comments for “~The Battle Royale For Britain!~”