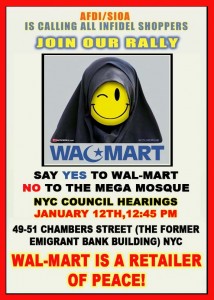 Good afternoon everyone! I just wanted to remind those who are in the NY area, that there is another Pamela Geller lead anti-Ground Zero Mosque rally coming up. The date is this Wednesday the 12Th, and the location is 49-51 Chambers Street, 12:45PM. So please bundle up, and do you part by showing up in force against the proposed Sharia Mosque!

Here is what Imam Rauf recently had to say about Sharia, to the Jordanian newspaper al-Ghad.

When a complaint is in the Middle East, says that “there must be a law,” he knows that this law exists. The only law that the Muslim needs exist in the Holy Quran and the Hadith. I have asked people directly after the onslaught of atheist th of September to take what many movements with political agendas, religious names? Why called the “Muslim Brotherhood” or “Party of God” or “Hamas” or Islamic Resistance Movement? I tell them that the trend towards Islamic law and justice begins in religious movements, because secularism has failed to deliver what he wants Muslims, the life, liberty and the pursuit of happiness.

Now that Ruaf has stated he respects the Bukhari ahadith, lets take a quick look at what else they say.

When it was the day of the battle of Al-Ahzab (i.e. the clans), Allah’s Apostle said, “O Allah! Fill their (i.e. the infidels’) houses and graves with fire as they busied us so much that we did not perform the prayer (i.e. ‘Asr) till the sun set.”

When the tribe of Bani Quraiza was ready to accept Sad’s judgment, Allah’s Apostle sent for Sad who was near to him. Sad came, riding a donkey and when he came near, Allah’s Apostle said (to the Ansar), “Stand up for your leader.” Then Sad came and sat beside Allah’s Apostle who said to him. “These people are ready to accept your judgment.” Sad said, “I give the judgment that their warriors should be killed and their children and women should be taken as prisoners.” The Prophet then remarked, “O Sad! You have judged amongst them with (or similar to) the judgment of the King Allah.”

Keep talking Imam, and non-Muslims in America will keep on exposing you for who you really are. Our friend Pamela Geller has more…..HERE.

9 comments for “Protest Against the Proposed Ground Zero Sharia Mosque! ~ 1/12~ POSTPONED DUE TO WEATHER”