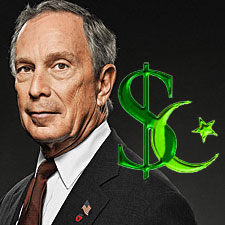 Yesterday true American leader Rep Peter King stated that he will hold hearings on “radical Islam”, and today we see the absolute traitor to America that Mayor Bloomberg has become. Hey mayor, thanks for showing us that your Sharia investment with your so called Muslim friends, is more important than the lives of your families future generations. You are clearly on the side of the enemy.

Rep. Peter King said in an opinion piece in Sunday’s Newsday that he intends to “break down the wall of political correctness” in the debate about what he calls Islamic radicalization.

The mayor said he does not agree with King and said the hearings are not appropriate.

The mayor was among the first and strongest defenders of the right for Muslims to build a mosque in lower Manhattan, near ground zero.

King is a Republican from Long Island. Bloomberg is a Democrat-turned-Republican-turned-independent.

35 comments for “NY Mayor Bloomberg: Hearings on “Radical Islam” are not Right”