Less than 10 ago I posted about Islamic-World.net, and their guidelines to getting Muslim children to do their part in creating an Islamic world. Today we will look at the results of their teen training course.

After conducting numerous adult courses, mainly for professionals, in the Khalifah Method and Scientific Understanding of Islam we had a number of past participants, who are also parents of children in their teens, asking if it might be possible to hold similar classes for the youth. These parents with teen children most of whom, while not serious behaviour problems but having been quite heavily influenced by secular materialistic ideas and Western culture, were less interested in the traditional beliefs and practices of Islam than was thought by their parents to be in their children’s best interest. The parents were saying things like, “I hope the class can motivate my child to be more interested in Islam.”

Since one of the primary purposes of the Khalifah Project is to motivate people, particularly Muslims, of all ages to have a greater interest in Islam, in their role as Khalifah of Allah, and in helping to bring about a much better world for all, we thought that an intensive youth course in the Khalifah Method and Scientific Understanding of Islam would prove to be highly motivational for their teen and young adult children.

Because believing something to be true is not proof of that truth we decided to provide an intensive course, three hours each day for ten days, over a similar range of subjects that we had been teaching to adult professionals. These subjects included, but were not limited to: Why Does Our World Suffer From So many Terrible Problems?; An Islamic Solution to the World’s Problems; A Scientific Proof of the Existence of God; Understanding Allah’s Creation of the Physical Universe (from the light at the beginning of the universe until Adam) Consistent With Both All of the Facts of Modern Science and With Our Islamic Beliefs About Creation; The True Nature of Reality; The Laws of Learning; Islamic Psychology, a New Paradigm; Effective Islamic Parenting; What It Really Means To Be a Khalifah of Allah; and, Communication Skills for Doing Presentations and Training to Offer the Khalifah Knowledge To Others.

At the end of the course the 25 youth who had participated in the intensive Khalifah training course were asked to complete a simple survey designed to evaluate their feelings about the affects upon them of what they had just learned. The following is a basic presentation of those results. As you will see, the survey clearly shows there was a high motivational affect in the direction of greater knowledge of Islam, greater Love for Allah, and a greater desire to do good in the world. These results showed a more significant positive motivational affect with girls than with boys, but we consider the results to be very impressive in both cases. We think these are exactly the type of results that parents would most hope could be achieved with their children.

1. I think attending the Khalifah Class was a valuable experience.

2. I think I understand the true nature of the world better now.

4. I feel motivated to be a good Khalifah of Allah.

5. I believe the knowledge I learned in the Khalifah Class can help make the world a much better place.

6. I feel like I want to help make the world a much better place.

7. I feel I know and love Allah more now.

8. I think I will try harder to be a good Muslim now.

We also asked the youth participants to tell us specifically what they learned in the intensive youth Khalifah course which they believed resulted in their increased motivation upon completing the course. The results were as follows:

1. To know how really special it is to be Khalifah of Allah.

Islamic supremacy.
Koran verse 003.110
YUSUFALI: Ye are the best of peoples, evolved for mankind, enjoining what is right, forbidding what is wrong, and believing in Allah. If only the People of the Book had faith, it were best for them: among them are some who have faith, but most of them are perverted transgressors.

2. To know how and why we are Khalifah of Allah.

Because you are taught to be slaves to Islam. That is nothing to be happy about.

3. To know the three important, but simple, obligations as Khalifah of Allah.

2. To lie to achieve your goal of an Islamic world.

3. To fight on until Islam is the only religion on the planet.

4. To have a logically obvious and scientifically accurate, simple method by which we can achieve any goal.

I will give them that, their plan is simple. It is to continue to use our freedoms against us, to eventually destroy us from within.

5. To have the power to fix all the problems of our world and turn it into a virtual paradise on Earth.

Will Christians and Jews who are being forced to live under Sharia Law, consider an Islamic world to be paradise on earth? Of course not, but they do not care.

6. To be part of the ‘transforming’ generation, who will stop the decline of Islam and bring the Muslim ummah back to its rightful place at the top of every aspect of human society and life.

Like I have been saying. Islam is all about domination, with no concerns for the beliefs of non-Muslims.

Koran Verse 003.083
YUSUFALI: Do they seek for other than the Religion of Allah?-while all creatures in the heavens and on earth have, willing or unwilling, bowed to His Will (Accepted Islam), and to Him shall they all be brought back.

7. To have a direct way to cleanse the heart and purify the soul.

8. To have a direct way to bypass hellfire and arrive at Judgment Day with a good chance immediate entry to paradise.

Here is what Muslims are told will bring in Judgement Day.

According to the Islamic sciptures, violent jihad is the answer to #8.

The threat of Islam, is not going to go away by ignoring it, and just like the last time I posted about Islamic-World.net, the USA had the most visitors on the site for the day. 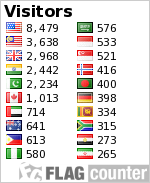 It is time to take a stand!